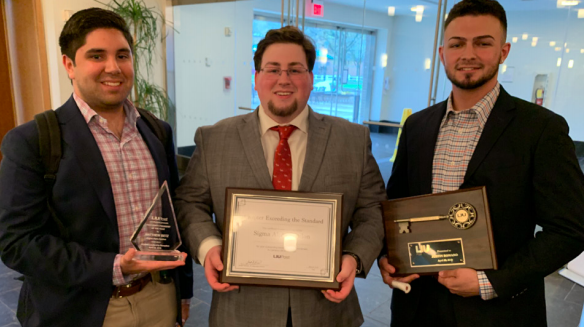 LIU Promise hosted a Student Leadership Reception in the Tilles Atrium on April 22 from 5 to 7 p.m., honoring student club and Greek leaders.

Joseph Vernace, associate director of Promise, said that the event is meant to showcase the hard work of students involved on campus.

“LIU Promise and the division of student life and student success is committed to the high achieving students that we serve, and one of the greatest pleasures of our position is to recognize student leaders for all the amazing things they do throughout the year,” Vernace said. “This is a really special night to come together.”

Taylor Rosenking, a senior biology major, came to the event to support her sorority, Delta Zeta, which won three of the Fraternity and Sorority awards. The sorority won the Service Award, Scholarship Award, and was recognized as one of the Chapters Exceeding the Standard.

Paris Romano, a sophomore graphic design major, also attended the event to support his fraternity, Phi Sigma Kappa, which won two Fraternity and Sorority awards. The fraternity was awarded the Scholarship Award and was one of the Chapters Exceeding the Standard.

“I hope we continue in the future to reach the expectation,” Romano said. Each chapter is expected to reach the standards set out by Promise, and those who “exceed the standard” are recognized for it.