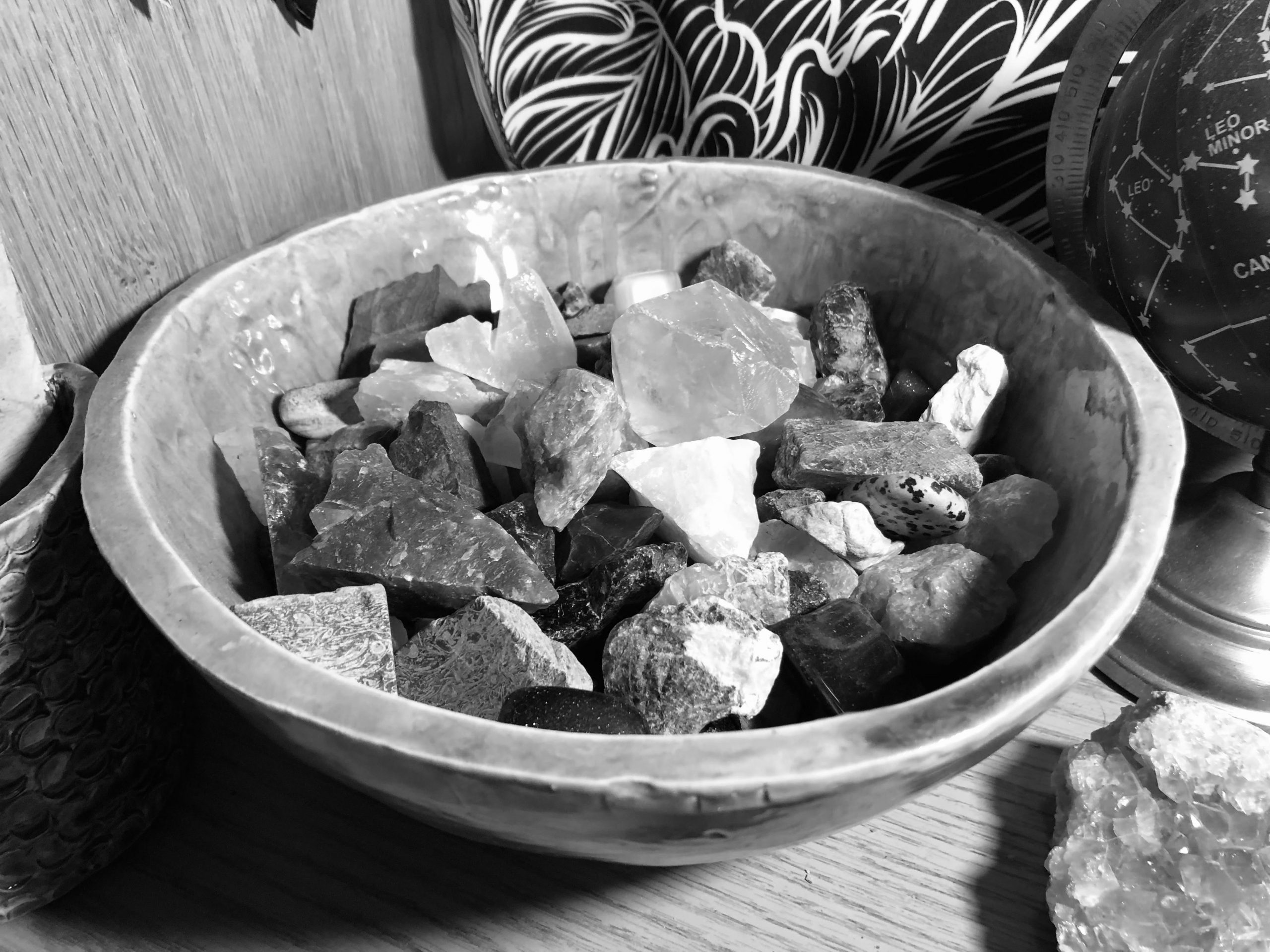 Interest and enthusiasm in crystals was first included in Roman history around 50 A.D. when Pliny the Elder described stones’ origins and physical properties in ancient writings. The word “crystal” comes from the Greek term krystallos, which means “coldness drawn together”.

In the Middle Ages, people thought that crystals would bring a spiritual presence into their lives. People yearned to have something that physically represented faith and spirituality. Ancient Egyptians used crystals for protection and health, as well as cosmetically.

Many different religions use crystals in different ways. Buddhist and Hindu beliefs and practices often use crystals as healing tools. In Western Christianity, crystal was often mentioned in writings and used to decorate important religious objects, as it was believed that crystal manifested transcendence. For the religious, crystal symbolizes purity, faith and perfection. It was often used to describe the purity of the Virgin Mary.

Individuals use crystals differently. Some just see crystals as beautiful pieces for jewelry, while others believe that holding crystals or positioning them on various areas of the body can give physical and mental benefits. The idea is that crystals interact with the body’s energy, creating a balance and alignment, known as chakra.

Many people use crystals for stress and focus, while others believe that crystals have the power to heal injuries and illnesses.

Sophomore international business relations major Emma Thibodeau has been collecting crystals since she was 12 years old.

“My mom started buying them to make necklaces and she would explain to me the meanings, and at first I didn’t understand the hype but after a little bit of time I started to realize that they were pretty cool so I started collecting my own,” she said. “They’re a cool thing to collect. Even if you don’t believe in their healing powers, they’re just pretty as decorations too. But if you do believe in their power to heal, that’s just another reason why somebody would want them.”

Thibodeau, like many other students at Post, is fascinated by the effects that crystals have on many individuals.

“Each crystal has its own energy. They come naturally from the Earth, and I believe everything in nature has its own energy so of course crystals do too,” she said. “There’s no science behind it, but if you hold a charged/cleansed crystal you just automatically feel better.”

While crystals have had a large following for some time, they have become even more popular during the pandemic, especially on the app TikTok.

“From what I’ve heard, it’s very easy to go viral on TikTok,” junior health science major Miranda Ruiz said. “Content creators lately have been blowing up because of TikTok. Information spreads so quickly now. It makes sense that crystals became a trend on TikTok. Recently, astrology and witchcraft have become popular. Especially with women between their teens and early twenties that use TikTok. I could see crystal-use blowing up on TikTok.”

Thibodeau thinks that people collect crystals due to how aesthetically pleasing they are, and because of the history of using crystals to heal.

“They’re a cool thing to collect,” Thibodeau said. “Even if you don’t believe in their healing powers, they’re just pretty as decorations too. But if you do believe in their power to heal, that’s just another reason why somebody would want them.”

“I like malachite because it’s cool looking and it’s supposed to be good for travelers, which I love to do,” Thibodeau said.

A study by University of London psychologist Dr. Chris French debunked the attributes of crystals in a study in 2001. In the study, he gave crystals to 80 volunteers, as well as an informational booklet about their supposed restorative properties. A control group that consisted of half the study participants had been given cheap plastic crystals, while the other half were given genuine ones. Both groups reported feeling the tingling, energy-enhancing sensations that were promised in the booklet, emphasizing the placebo effect.

Despite the research contradicting the effects of crystals, Thibodeau believes that crystals can help people.

“If you’re having a bad day, it’s nice to just look at or hold your crystals and you automatically feel better. Some people use them for physical pain such as headaches, which I’ve also tried before. But overall, they help me to feel more positive and at peace with life,” she said. “They’re a great thing to get into. Everybody should keep a crystal or two around to help cleanse your space.”