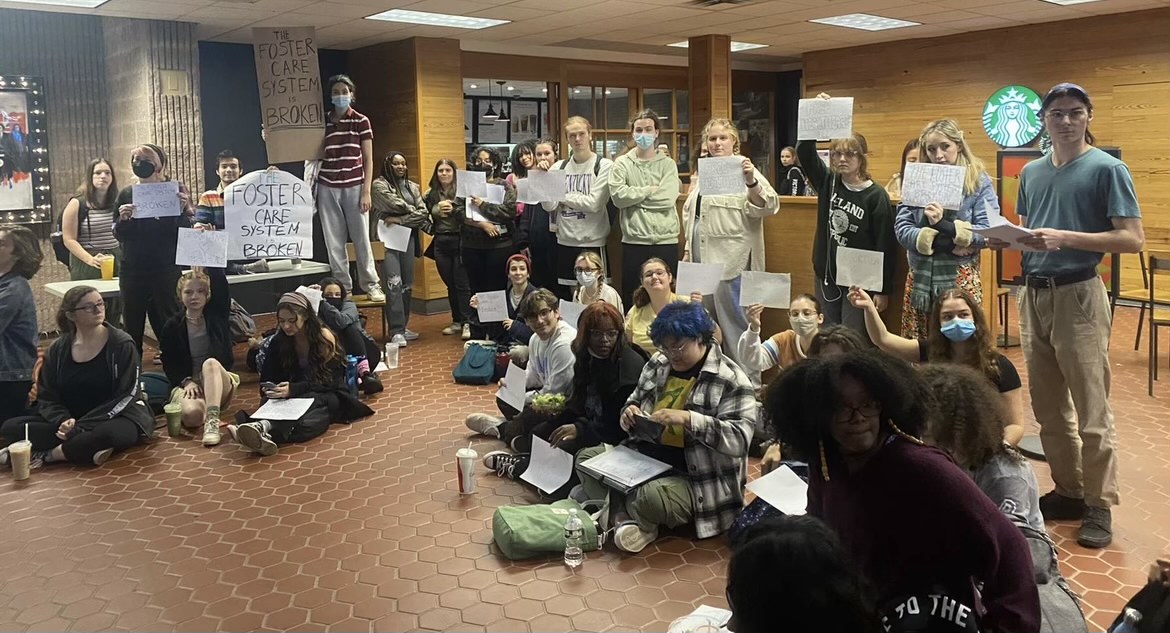 Tensions arose in Hillwood Commons during common hour when the LIU American Club tabled in support of the pro-life movement, facing opposition from pro-choice students on Thursday, Sept. 29.

Club members held up signs that read “Abortion is not right,” “Women have a right to support, not abortion” and “All humans deserve human rights,” among other things.

Not long after the club set up their tables, pro-choice students began protesting their messaging. Students gathered next to the club’s table holding up signs, as well as coathangers in reference to illegal abortions that people used to have in the U.S. before Roe vs. Wade, which often involved coathangers. One student held up a sign that said “The foster care system is broken.” Others simply sat in support of the pro-choice activists.

Senior theatre arts major Virginia Alonso-Luis was among the students in the pro-choice demonstration.

“I was just looking forward to getting coffee, and there was some really visible content, anti-abortion content, that was irritating me…I was trying to ignore it, but then I found that it was so grating to me that I wanted to do something, but I didn’t want to insense the anti-abortion folk,” she said. “I didn’t want to be inflammatory right out the gate.”

Alonso-Luis says that she thinks there is a time and place to be assertive, but that she didn’t want to be assertive right away. She made a sign on a piece of wood and sat down next to the American Club, demonstrating contrasting views to their tabling event.

“People ended up bringing their own posters, somebody brought hangers, a lot of people took it somewhere I didn’t think it was gonna go, which is a good thing,” she said.

Alonso-Luis is not part of any political groups on campus, and says that her political action at Post is to show students that they could voice their beliefs without having affiliations with political groups.

“You don’t have to be represented by anyone, you don’t have to meet an institution’s arbitrary idea of what makes someone legitimate to organize, you could just do that,” she added.

Junior musical theatre major Adam Turner was among demonstrating students. Turner, like many others, joined Alonso-Luis in her effort to support the pro-choice viewpoint on abortion.

“I got back from class, walked into the door and saw a huge sign saying ‘abortion is not right’ and I saw that there was a small crowd of people chanting…I just instantly grabbed paper and started chanting because [abortion] is a right,” he said.

Junior musical theatre major Zavie Ward was a part of the pro-choice group as well. They said that the university allowing the American Club to exist shows a lack of empathy.

“I want more empathy. I want the administrators of this school to take a look at the student body, and kind of reckon with the monster that they’ve created, because allowing an organization like the America Club to thrive and exist on this campus, I just think it’s heinous,” they said.

The American Club was approved by the Student Government Association in March of this year.

Ward feels that the group stands for something different than they say they do.

“The American Club portrays itself as just a patriotism club, but I feel like we all know what it is and what it stands for, especially something like this who’s president and most of its members do not have uteruses, and granted neither do I, but I’m standing in solidarity, I’m not trying to control anyone or tell anybody what they should do with their bodies,” they added. “People deserve their own autonomy.”

“Abortion is healthcare, it is a necessary thing that all women should have the power to choose what they do with their bodies,” he said. “That is not for us to control, especially all of these people without uteruses.”

Alonso-Luis says that she was there to support people with differing views from the American club.

“There are people in our school who aren’t in alignment with those beliefs, who dont agree with harsh abortion legislation, and there are people who will support you if you are in an oppressive class that might be victimized by that kind of legislation,” she said. “If people are really uncomfortable with others getting abortions, their resources should go to sex-ed, community organization, etc, and not towards yelling at people and moralizing people who get abortions.”

The American Club declined to do an official interview with The Tide, however junior business administration major Matt Cairo, the club’s president, said “I think it’s pretty clear what we’re doing, we’re here to support the pro-life movement.”

Alonso-Luis has a message for the students at the demonstration in the wake of the events on the 29th.

“I’m really grateful and appreciative that people came through, but if you have strong opinions about reproductive rights, about anything at all, you will not succeed in your unionizing efforts, in your community organization or in your protesting if you are only ever incentivized to organize when there’s someone opposing your beliefs,” she said. “When the America Club isn’t there, do you still act?”