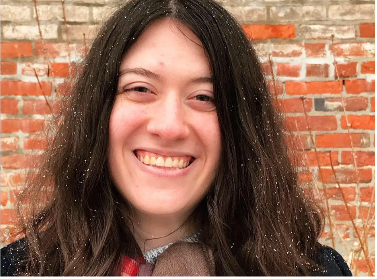 Emma Kocar is a junior film major known for her love of theatre. What students may not know about her is that she is also a young entrepreneur.

Kocar is the founder of Ranny’s Crystal Cave, a small business that creates crystal based jewelry. The name came from her childhood nickname of “Ranny,” which was given to her by one of her best friends.

Kocar began collecting crystals a few years ago, an interest which lead to her collecting crystal jewelry. After watching friends wire wrap, a process where a person wraps a wire around an object to create a piece of jewelry, she became interested in practicing the craft herself.

Armed with only crystals, wire and YouTube tutorials, Kocar taught herself how to make her own jewelry. After learning the basics, she took what she learned and twisted it into her own style, creating things that she found appealing.

She began the business itself after getting inspiration from a friend who runs an online crystal shop. Kocar currently runs every aspect of the business herself, while simultaneously remaining a full time student. When asked how she is able to handle the workload the comes with both responsibilities, she said that it’s “just a matter of time management.”

One thing Kocar has learned from running her own business is how to promote herself. At first she wanted to avoid posting about her business too often in fear of annoying her friends, but soon found that her fears were unfounded.

“The thing is, I would hope that my friends would be my first system of support, and so far that’s been true,” she said. “There was really no need to worry about that because they all want to support me and it’s great to see them really getting excited about it.”The most exciting part of running her business came when she made her first sale to a stranger. “[It] was really exciting for me because it reminded me that my work is out there for the public, and it’s not just limited to my friends who have been interested in purchasing it so far,” she said.

Kocar’s advice for students looking to start their own businesses is to “just go for it” and remember that success never comes overnight. “There is no such thing as overnight success because a lot of people don’t see all the sweat that goes into putting up something that turns into a super successful business,” she said.

Ranny’s Crystal Cave can be found on Etsy, Facebook and Instagram. Emma also accepts in-person purchases on campus, as well as custom orders.