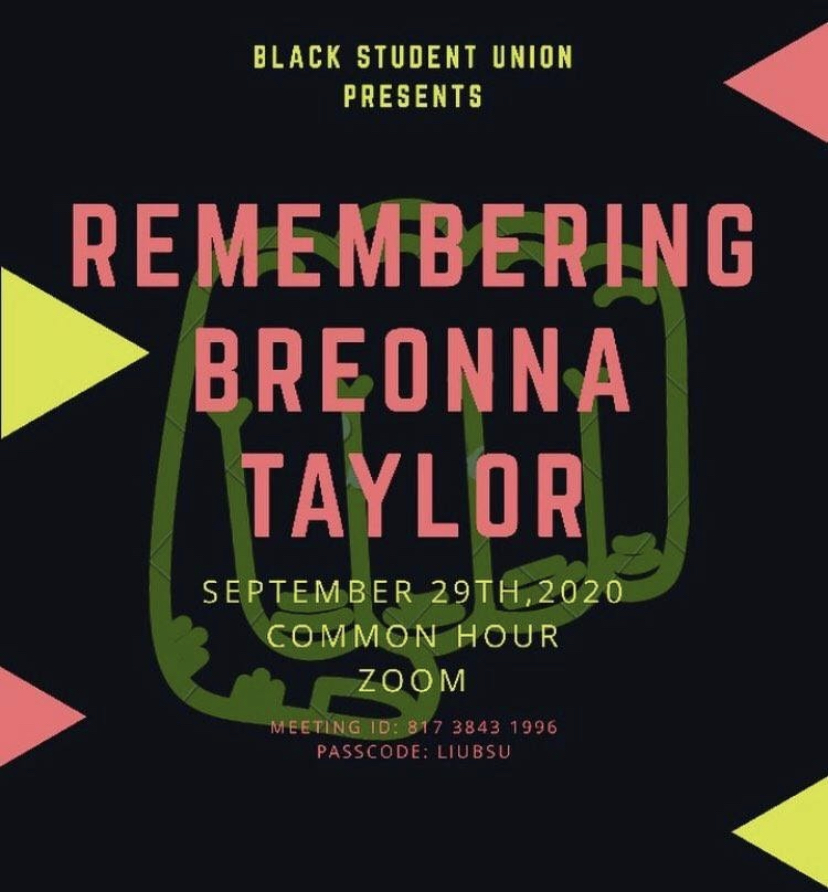 The Black Student Union (BSU) held an online forum discussing the recent verdict for the three officers responsible for the murder of Breonna Taylor on Sept. 29. The meeting took place via Zoom and was open to those who wanted to speak up, share or learn about the Breonna Taylor case.

Breonna Taylor was killed by Louisville Police officers on March 13. Since her death, the nation has demanded justice for Taylor. Recent developments have shown that the three officers, Officers Brett Hankinson, Jon Mattingly and Myles Cosgrove, entered her house with a no-knock warrant while Breonna Taylor and her boyfriend, Kenneth Walker, were asleep. Kenneth Walker, a licensed gun owner, fired out of fear, mistaking the officers for intruders. The officers then fired a total of 32 shots in return. Taylor, a 26-year-old emergency room technician, was struck around eight times, killing her.

Only one officer was terminated and indicted for “wanton endangerment.” According to Kentucky law, wanton endangerment is “in the first degree when, under circumstances manifesting extreme indifference to the value of human life, he wantonly engages in conduct which creates a substantial danger of death or serious physical injury to another person.” Instead of directly being charged for the death of Taylor, the former detective was charged for a crime that resulted in less punishment, leading the nation to resume their fight for justice for Taylor.

The BSU highlighted their Union as a space of cultural diversity for people of color, and a space created for support, safety and to celebrate the color of one’s skin in a world where individuals are judged by such arbitrary factors. The forum that the BSU created was filled with the emotions that current students felt regarding the Taylor incident and verdict hearing. A sounding note of the organization was the feeling of unity resonating between members through the Zoom meeting.

Amanda McCollum, headliner and host of the discussion, spoke out against the verdict of the officers and their actions that took a Black woman’s life.

“If the prosecutor had properly presented the evidence in this case and shown the intent of the officers, I have no doubt the jury would have given out indictments. I honestly do not believe the problems lie with the jury; I believe the issue was with Attorney General Daniel Cameron who was the prosecutor who presented to the Grand Jury,” McCollum said. “Although a Black man, AG Cameron, works within a system that has historically been used against Black people,  his Blackness does not make him an ally to Breonna or her family. This is a misconception that I think was very widespread.  Black people put their faith and trust in a Black man who holds a position able to cause real change and enact justice for people who deserve it, that does not all mean he wanted justice for her or cared about her case or story.  These men took an innocent woman’s life.  Punishment is deserved and if the system was fair and just, punishment would have been given.”

BSU club members and call participants expressed feelings of hurt, confusion and betrayal from the United States government and police force. During the discussion, Aniyah Brown, junior and communications major, presented her opinions of the current problem of increasing police brutality in America. “The police system itself was built on systemic racism. Their origins were for slave patrol. The system works for who it was made for and that is mainly, rich white men.  The system itself presents the origins of privilege.”

Samantha Winters, a junior art major, followed up with a message to allies of POC nationwide, “If you are a non-Person of Color and you recognize your privilege and do not use it for the good of everybody, then you are the problem as well,” she said. “ You are contributing to the systemic oppression that is suppressing or Black and brown brothers and sisters. That is something that cannot be forgiven until you begin to make the change within yourself.”

Later on in the night McCollum shared her views on how the police have gained and maintained their power. “Like all public servants, police are given their power by the people. In theory, we entrust these few to protect us, provide us with comfort and a safe environment and in exchange we bestow upon them authority to conduct themselves in a way that would allow them to do these things. However, we know that these protections, historically, have only been afforded to a select group of people. This group has given police license to abuse everyone who does not fall into their strict societal category. This is where I believe this abuse stems and starts from,” she said.

More feelings of anger towards the judicial and news outlets arose when students began reciting articles in an attempt to justify breaking and entering into Taylor’s home and killing her. Many articles attempted to convey the same narrative, trying to prove that because her boyfriend is an alleged drug lord, he is the reason why her home could have been broken into. Students at the meeting cited the media’s attempt to justify unlawful entry and blatant ignorance for human life by painting a picture of drug possession and selling in Breonna’s home with no evidence.

The BSU students and Zoom attendees agreed that there is a current theme of discrediting Black African Americans to justify murder. The group also agreed that in the U.S., there is a social belief system that connects the skin of people of color to criminality and violence, that police officers embrace this mentality in order to justify their actions and that their followers appeal to this mentality when criticizing punitive action against them.

It is especially damaging knowing that not only was an innocent Black woman killed in her home while she slept, but that people within the media and Louisville Police tried to smear her image in order to justify and validate her murder.

“The idea of an innocent woman not only being murdered by those sworn to protect her but also being judged and vilified for things not pertinent to the case only adds insult to injury. Breonna’s case and Breonna herself, like all others, will never be forgotten, their names are more than hashtags and the Grand Jury’s decision will only cause more unrest in my opinion,” McCollum said. “No Justice, No Peace.”