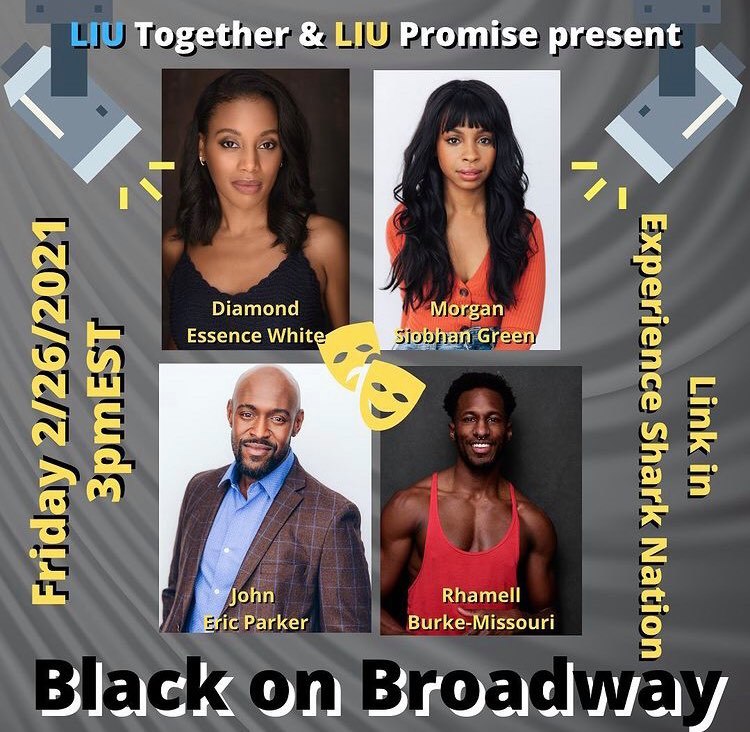 The Experience of Being Black on Broadway

On Friday, Feb. 26 Promise hosted the Black on Broadway Q&A session over zoom. Four high profile theatre actors and LIU almuni, Diamond White, John Eric Parker, Morgan Siobhan Green, and Rhamell Burke-Missouri. discussed their experiences not only with LIU’s theatre program but their general experiences of being a Black theatre actor after graduating from Post.

One question asked was about what kind of lessons they learned from campus and how they applied those lessons to their theatre work after graduating. A common theme from the answers given was that they all developed a good work ethic. Through her hard work and dedication to the arts, Siobhan Green commented saying that she felt like she could fully advocate for herself as a performer. White agreed, responding that “you may not be the most talented person in the room but there’s no reason to not be hard working.”

Another common theme was the importance of being able to fully express themselves through their work. Parker told the audience a story about how he felt like he was about to give in but a friend reminded him that there’s only one person in the world like him and that he needs to make the people around him see that. “You have to walk into a room and think ‘you need me and this is why’,’” he said.

Another question asked was about their vision of a diverse and ideal theatre industry. The entire group expressed generally the same idea of having the theatre industry not only be a safe space for people to fully express themselves but also to have a more diverse array of stories be told. It was mentioned by White that one shouldn’t have to worry about being a “diversity hire” and one’s role in a production should be based on their work. Burke-Missouri has expressed the desire of having “characters of all shapes and sizes” and “people being able to be themselves in all aspects.” Siobhan Green expresses similar desires adding on to that by saying that she wants to “debunk the myth that a certain education is required to play a certain role.” And in terms of stories being told, Parker said that we “can we have an industry where a piece can exist without saying ‘oh great another black trauma story.’”