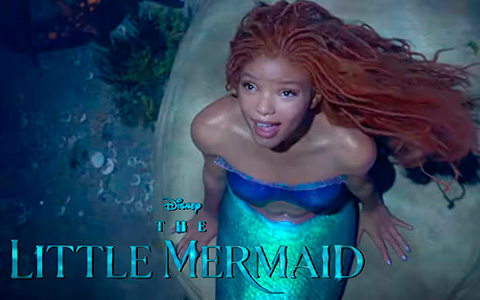 The new trailer for the live action Disney movie “The Little Mermaid” was released on Sept. 9 and there was an outpouring of positive and negative feedback from viewers.

Halle Bailey, 22, is a Black singer and actress who will be starring as Ariel in the upcoming film. Melissa McCarthy will be playing Ursula, Jonah Hauer-King as Prince Eric, Javier Bardem as King Triton, Daveed Diggs as Sebastian, Jacob Tremblay as Flounder and Awkwafina as Scuttle.

Although Bailey adapted the green tail, red hair and purple shell bra for the role, there have been complaints directed at Disney for not casting a white actress to match the original 1989 film. The hashtag #NotMyAriel began trending on twitter within 48 hours of the trailer being released. In the trailer, Bailey is seen singing “Part of Your World” and thousands of viewers on YouTube left hateful comments due to the color of her skin.

Many critics of the remake are now falsely using science to justify their reasoning on why Ariel is not Black and Bailey should not have been cast for the role. One critic took to twitter to explain the science behind it.

“Mermaids live in the ocean. Underwater = limited sunlight. Limited sunlight = less melanin. Less melanin = lighter skin color. Because they live underwater, which has no access to light beyond a certain depth, Ariel and every other mermaid in existence would be albino.”

Out of the 12 official Disney princesses, seven of them are represented as white, while only one of them is Black. Fans of Disney share their thoughts on how this lack of representation affected them during their childhood.

“Growing up with a darker skin tone, I never felt like I fit in with all the Disney Princesses, beside Princess Tiana. Now, seeing Halle represent all the little girls with colored skin means so much to me! She’s really making a difference in the role with this movie and I’m so excited to watch it when it comes out,” said Kaylah Rivera, Biology major at Hofstra University.

Trevor Noah responded to the racist backlash on his show, “The Daily Show,” saying, “Once again, a bunch of internet racists are upset that a fictional character is being played by a Black person, and honestly I don’t know what the big deal is.”

Other people that watched the trailer shared this sentiment, questioning why the race of a fictional character in a children’s film is causing such an uproar.

“I find it ridiculous that people are arguing over whether Ariel is white or Black. She’s a fish. Her best friend is a Jamaican crab. Why does it matter? It’s a kids movie and somehow the adults are mad about it,” said senior education major at Queens College Nicole Reyes.

Despite the criticism, there is a lot of positive support for the movie and Bailey especially from children who are typically unrepresented on screen. Parents began to start posting their children’s positive reaction to seeing Bailey perform as Ariel. With many of them saying “She looks like me!” These excited reactions to the new Ariel show the importance of diverse representations.

Bailey is ignoring the hate comments and is  instead reposting and commenting on the positive responses and videos.

Fans of the trailer share their delight at seeing the positive reaction from children.

“It’s so heartwarming to see kids get so excited for the new Ariel. They don’t care about the color of her skin, just the fact that she’s a real princess. Adults should learn to react like the kids,” senior education major at Queens College Lauren Hernando said.

In a recent interview, Bailey discussed her audition process and what it was like to be the new Ariel.

“I’m so grateful that I kind of get to reinvent Ariel and show other young, beautiful Black and brown children that hey, you can be this too,” she said.