On Saturday, Oct. 18, before the homecoming game, The Pioneer student newspaper hosted its first alumni party, where current writers, editors, and photographers were able to mingle and network with former staff members of the paper. The alumni who attended, ranging from 1998 to 2012 graduates, were eager to see their old works and reminisce while looking through the newspaper archives.

Jarad Wilk (’01), former Managing Editor, Arts and Entertainment Editor and Columnist, recalled his days working on the paper as similar to his current job as a Sports Desk Editor and Columnist for The New York Post. “It’s much more strict now [at the NY Post]; however, [at The Pioneer], I could do whatever I wanted with my column, which I guess I still do,” he said with a smile. “But the days [for our staff] were long. We came in around 4 p.m. and often stayed until 6 in the morning,” Wilk said. He mentioned that his work on The Pioneer helped him understand deadlines, which helped prepare him for working with four each day at The New York Post.

“The room looks the same, only it’s a lot cleaner now,” said Michael Gonzales (’09). Gonzales was The Pioneer’s Arts and Entertainment Editor. He recalled sitting in one of the editing rooms watching Obama being elected for the first time while doing newspaper work. “We had a futon in there, and a TV we used to turn on with a paper clip,” he said, laughing while pointing into the editing room. “It’s still the same, but at the same time it [has] changed a lot. We used to draw on the walls! The two years I was an editor were great.”

Another alumni, Jeffrey Fisher (’98) who is currently a graduate student at Columbia, used the paper as a way to get more involved on campus. He mentioned that when he was on the staff, the paper was the only way of getting news, alongside television. “Our cell phones didn’t have Internet, so the paper seemed more important,” he said. He emphasized that it was not only important for experience in the workplace, but also for students reading it as a way to get news.

Jacqueline Favoloro (’12), who was the Co-Editor-in-Chief from 2011-2012, talked about The Pioneer’s impact on her life after graduating. She gave The Pioneer a lot of credit for preparing her for her current position as a writer for Kessler International, an investigation firm. “It showed that I could do a lot of stuff at the same time, with keeping deadlines and having to keep control over several things at [once],” Favoloro said. She now writes reports, blogs, and social media coverage for her company.

Media Arts Professor Julie Price and her PR 67 class assisted in organizing and running the alumni event. They decorated the newsroom, hanging streamers, filling baskets with Pioneer giveaways, and displaying old issues on the walls. “It’s nice to see successful alumni come here and talk and mingle with current writers and editors. I’m glad to host the event,” Price said.

“It’s exciting for current students to meet alumni and see what they do today, and I can imagine that it was nostalgic for the alumni to come back to the school and the Pioneer [news]room,” said Moa Golster, a junior Journalism major and an online editor.

Because of its success, The Pioneer hopes to plan future alumni events, and possibly make the Homecoming party an annual affair. 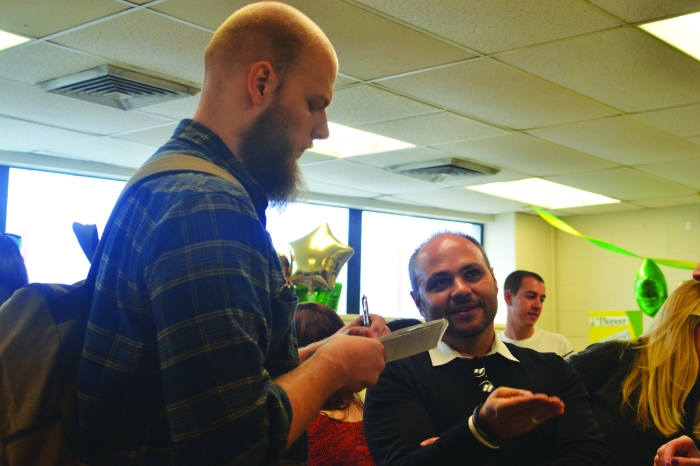