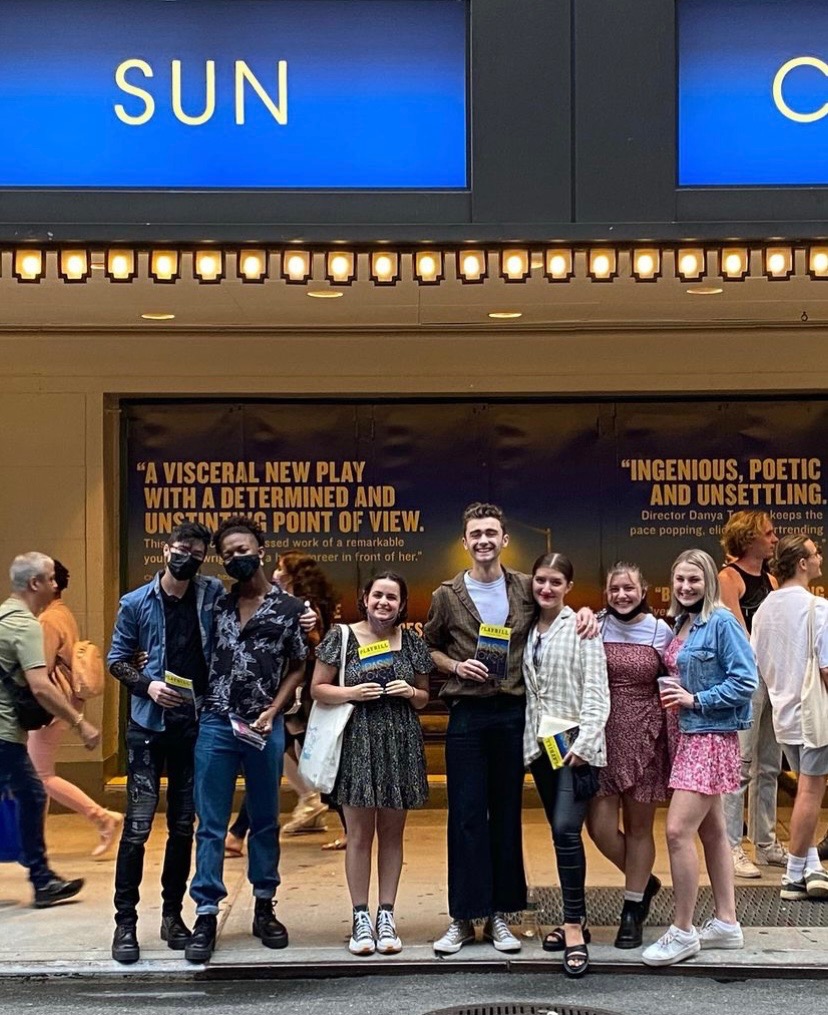 The Return Of Broadway

Broadway is often considered the pinnacle of theatre for spectators and actors alike; the shows have the biggest budgets, play in the largest venues and cast bigger talent than any other theatre district in a U.S. city.

However, it’s not spectacle and scale that make Broadway this hub of the theatre community, it’s an unspoken feeling that audience members and performers experience inside the walls of a Broadway House.

“I remember the feeling of joy and community in the audience; it was a beautiful, unique moment,” sophomore musical theatre major Sarah Gordon-Macey said. “All [of] these strangers around me, they could feel the way I felt.”

The shared community Broadway patrons experience can even have a large impact on someone attending a live performance. Even people who haven’t seen a Broadway show can still acknowledge the cultural significance of Broadway, and the impactful meaning it has on the theatre community.

“I [wasn’t] the same person when I left that [show] as I was when I went in,” senior musical theatre major Ellie Lauthner said, recalling her first experience watching a Broadway show. “It made me cry about eight times from start to finish, it’s a completely unique experience.”

Broadway shows run year round, and each show normally has eight performances a week. It is a rarity for Broadway “to go dark”, and performances in all theaters to be cancelled. In fact, shows haven’t been cancelled for a prolonged period since the World Trade Centers collapsed in 2001. However, on March 12, 2020, all Broadway theaters were shut down in order to prevent the spread of COVID-19.

“It was sad to see things shut down, it was really hard to stay positive when it felt like the industry I love and aspire to was crumbling around me,” Lauthner said. Many members of the theatre community were incredibly saddened by the shutdown, not to mention the hundreds of working performers who lost their jobs.

Broadway remained shut down for over a year to ensure the safety of performers and theatregoers alike during the pandemic. However, after 471 days, the first Broadway show to play to a live audience opened on June 26, 2021, when “Springsteen on Broadway” became the show that ended the longest shut down in Broadway history. “Springsteen on Broadway” was able to open several weeks before many other shows due to its small cast, which required fewer COVID-19 protocols. Other shows began reopening in early August.

Theatre patrons were thrilled to see the return of Broadway Shows, and the lucky few who have been able to get tickets for reopened shows rave about how special seeing live theatre is after such a long hiatus.

“In one word, it was magic. True magic,” Macey said, “Sharing those same moments once again with a group of fellow eager theatre goers was like nothing else.” Others who have witnessed Broadway shows since the shutdown share Macey’s sentiment of experiencing magic.

“There is now a different kind of grateful energy in Broadway Houses that I haven’t seen in a long time,” junior musical theatre major Patrick Blanner said. Following the pandemic shutdown, it does seem that the energy surrounding Broadway shows, and the industry itself, are experiencing changes as a result of the pandemic and other events that occurred during the shutdown.

The theatre community, and especially the Broadway community, have failed to represent and uplift BIPOC voices for years.

“Marginalized communities, especially the BIPOC community, have been groups that theatre has failed to properly support,” said Macey. Although there’s still an enormity of work to be done, the Broadway that has come back after the shutdown has already begun implementing changes to support marginalized communities.

“All of the plays on Broadway right now were written by Black playwrights, which is amazing,” Lauthner said. The Broadway League has already hired a new director of equity diversity and inclusion, and Actors Equity has adopted a new Diversity and Inclusion Retrofit Strategy to better support its members in marginalized communities.

Overall, the return of Broadway has brought with it lots of changes and developments, and members of the theatre community are hopeful for what the future of this industry might look like.

“It feels like the community as a whole has grown stronger together,” said Blanner.

Macey echoed Blanner’s sentiments in her hopes for Broadway’s future.

“I want the Broadway of the future to be somewhere where everyone feels welcome and seen and represented,” Macey said.