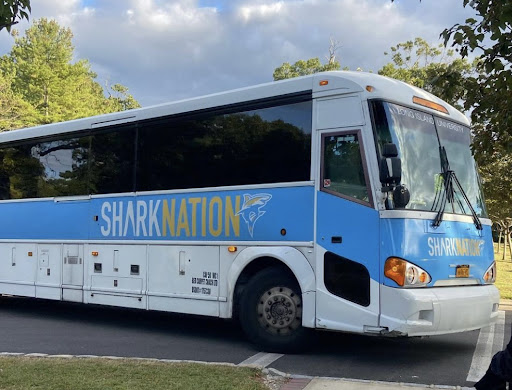 This year, the off-campus shuttle, the Shark Shuttle, introduced new drivers and an updated schedule. As the semester comes to a close, students reflect on their Shark Shuttle experiences.

The Shark Shuttle serves as the main means of transportation for dormers on campus, bringing students to Broadway Mall, the Hicksville train station and back to campus on a loop.

Junior graphic art and design major Alan Knoll relies on the Shark Shuttle at least once a week to go to Broadway Mall. Here, he picks up groceries and hangs out at the Round One arcade.

Knoll believes the shuttle is easy to use and a cost effective means of transport. However, he believes there’s room for improvement.

Knoll has had issues with the shuttle arriving extremely late. On one occasion the shuttle drove past him completely.

“I was standing right there and it drove past me. I guess they didn’t see me. I have a flashlight on now whenever it’s dark just in case,” Knoll said.

Knoll believes shuttle issues are much more prominent this semester.

“We had the same driver for two years and now there’s new people who I don’t think know the route. The first day the bus was in session they drove the complete wrong way,” Knoll said.

Going forward Knoll hopes for more training for the drivers and better communication so students aren’t left wondering about the shuttle’s wearabouts. This semester Knoll had to order multiple Uber rides due to the Shark Shuttle’s inconsistency.

“I had to do it at least three times now. I had no problems with it prior to them switching who drives the bus,” Knoll said.

These complaints are shared by sophomore marketing and merchandising major Amir Saunders. The Shark Shuttle is not his ideal mode of transport, but without a driver’s license Saunders has limited travel options.

“Since I’m out of state and I don’t drive, I often have to take the shuttle to get necessities from stores like Target,” Saunders said.

Saunders has had multiple unfavorable experiences with the Shark Shuttle. With the new drivers and the updated shuttle schedule this semester, the shuttle service had a rocky start.

“There were a few times at the beginning of this semester where they would literally drive behind the mall and nobody knew where to wait,” Saunders said.

Saunders voices his frustrations with the Shark Shuttle’s inconsistent pick up times.

“The schedule has been all over the place. It’s often late to pick students up from campus so that can be super inconvenient when I’m on a schedule. It’s supposed to wait at [Broadway Mall] until the 50th minute of every hour, but it never does. It just shows up at like the 45th minute then leaves 10 seconds later. It doesn’t wait at all,” Saunders said.

As of now there’s no way for students to know where the shuttle is located as they wait to be picked up. Students like Saunders are left wondering if the bus left early or if it’s running late.

The Shark Shuttle schedule states that LIU is not responsible for any delays or disruptions in service.

“You have to stand in whatever weather for like 10-15 minutes because it’s so unpredictable. that’s the only way you can catch it,” Saunders said.

Saunders claims to have gotten sick multiple times as a result of waiting a prolonged period of time in unfavorable weather.

“I just think the overall premise of The Shark Shuttle is really funny. When I first got to school as someone without a car it was kind of a novelty. Me and my friends just started making jokes about it and I felt like the shark shuttle should have some sort of social media presence to bring together the lovers of The Shark Shuttle,” Hough said.

Despite the joking nature of the account, Hough appreciates the shuttle drivers. In her experience the drivers are very kind and timely.

“The drivers are always very timely and wait an adequate time before leaving so as not to leave anyone behind,” Hough said.

Her main complaint is the lack of warning from the university when the shuttle isn’t running. She’s also taken notice of the inconsistency with the physical vehicle itself.

“There seem to be a lot more different vehicles known as The Shark Shuttle, such as the long sort of vip looking one, the one with the shark emblem, the mini one and the extra mini mini van one that only has 7 seats. Last year there were really only one or two,” Hough said.