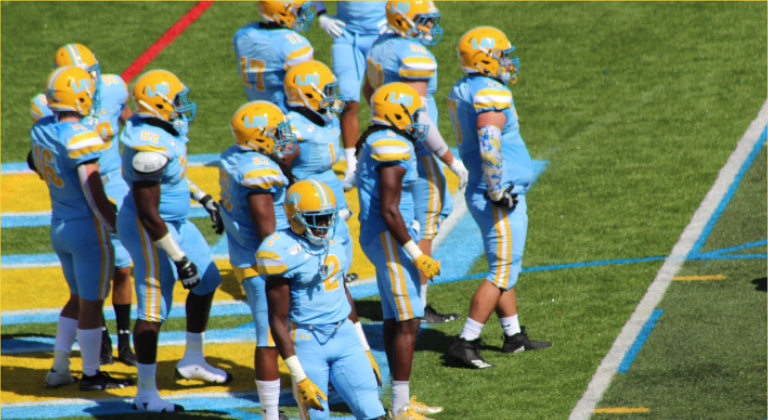 The Sharks Prepare for the Big Homecoming Game

The Sharks Prepare for the Big Homecoming GameThe football team celebrates their first homecoming game as the Sharks on Saturday, Oct. 19. Despite a rough start to the season with five consecutive losses, anticipation is high and the team is prepared to win their first game at their homefield. “Everything is new with the same old tradition. There is a new name and colors, yet we are still conscience of our winning tradition and great success on homecoming and look to give the fans a victory,” head coach Bryan Collins said.

This homecoming match is against the Saint Francis University Red Flash, who have a 3-3 season record and are 1-1 in the Northeast Conference. Despite the Sharks’ losing streak in their first season playing Division I, they are decreasing the score difference in every game. Collins is optimistic to the trend and said the plan is to let his young team find their way. “They are getting more comfortable and getting closer to winning, while getting a strong foundation while competing,” he said.

To be successful in future games, Collins pointed out that the team needs all 11 on the field to work together and play well, along with all 22 total starters. “For the homecoming game against the Red Flash, the Sharks want to make sure they focus on their own performance. We need to worry about ourselves and making ourselves aware,” Collins said. “They were the 2015 conference champs and they are a big physical team and we will match their intensity in front of our own crowd.”

The Sharks only have three home games this season, and Collins wants to take the chance to celebrate a win at their homefield. “You always want to defend your home turf,” he said. “It is more fun against your home crowd, and is a better experience for your fans and alumni. You want to take advantage and have a great home record, even more important for homecoming.”