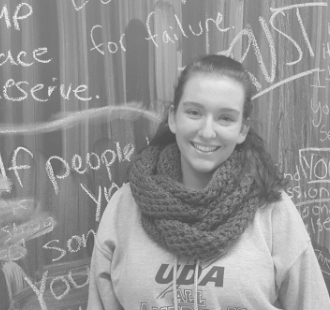 While the Theater, Film and Dance building is relatively small, the amount of talent inside is large. Acting and musical theatre students are preparing for Post Theater Company’s (PTC) spring 2018 season while still finding time to study for finals. Even though the cast of “Spring Awakening” recently gave their last bow, theatre students are counting down the minutes towards auditions on Dec. 8 and Dec. 14-15.

Theatre majors have finals coming up like every other student; however, a large majority of them are graded on physical performances, such as scene showings, rather than performance on a multiple-choice exam. “You have to completely warp yourself into the person you are playing in order to succeed [when] auditioning for a role.” Gabby Amico, a senior dance major, said.

Josie Moyer, a freshman musical theater major, already had her dance final but has other finals coming up. While students generally don’t find most final exams fun, she said she had a blast; her final dances were for hip-hop and floor barre classes. “The floor barre dance was very interpretive, all about telling a story,” Moyer said. She described her monologue for auditions. “My character is struggling to show her employer all of the good she could do for the community as a performer,” she said. Even though this is Moyer’s first audition within PTC, she feels prepared, and she can’t wait for Dec. 15.

Paul Bakey, a junior musical theatre major, is not worried about his written finals; he’s more worried about his performance finals, but he is grateful that he can use his material for his performance final in auditions. For audition material, students were told to find two contrasting monologues. Last semester, Bakey used a short Shakespeare monologue which ultimately landed him a role in “Spring Awakening” where he was cast as Moritz.

“Auditioning is part of my major, so I consider the preparation for the auditions as preparing for finals,” Griffin Lockette, a junior musical theatre major said. When preparing for auditions, Lockette focuses greatly on her comedic monologue. “It flows off my tongue really smoothly,”she said. According to Lockette, the character she will portray has a serious personality but wants to showcase a more comedic side of herself.

“Acting and dance go hand-in-hand because you have to play different characters in both aspects. Just because dance isn’t a speaking role, it doesn’t mean that you aren’t acting,” Amico said.

While the PTC auditions and finals close in, students have taken advantage of what they’ve learned in class and are using their skills to study and to prepare for auditions. “The battle would have been completely internal,” Moyer said, “While I could see the different tactics of motivation present, I wouldn’t know how to make my performance all about affecting someone else.”

“Preparing for auditions is a little tough, but that is how preparing for this career is; balancing a lot of important things at once and having to do everything at 100%,” Amico, said.