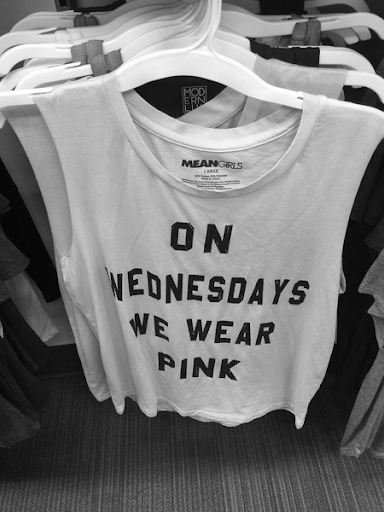 This Wednesday, Are You Wearing Pink?

In honor of one of our society’s most beloved cult classics, Oct. 3 is known as “Mean Girls” Appreciation Day.

In 2004, the world was introduced to Cady Heron and the infamous group of tyrants that we all love to hate in the blockbuster must-see, “Mean Girls.” This film became an instant classic for young women around the world.

“Mean Girls” became a pioneer of ‘chick-flicks’ by exposing the true toxic culture behind a realistic high school experience. Young women everywhere found themselves laughing at the quick-witted humor of the film’s outrageous characters, all while relating to their struggles of being in high school.

Over the years, “Mean Girls” became an iconic film for fans to obsess over in many ways. From the bold outfits, to the ‘fetch’ catchphrases, all the way down to the suggested humor, “Mean Girls” evolved into a culture of its own.

After being released over a decade ago, the film remains just as relevant and popular as it was in 2004.

“Personally, I feel it’s stayed relevant all these years for many reasons. It’s amazingly funny all while showing viewers a glimpse of how some highschool girls and highschool life can really be. Girls all over the world wanted to look like, act like, and even in some ways be these girls. It just really impacts fans because it gives us real life situations that we can all relate to,” junior psychology major Anastasia Hernandez said.

“Mean Girls” has earned an iconic spot in our society for several reasons. It’s reputation for teaching young adults relevant life lessons about growing up in an American high school culture was a major one.

Throughout the film, we follow junior exchange student Cady Heron. Heron experiences the best and worst that high school has to offer she even shows viewers about living in the consequences of her actions.

“At a young age, “Mean Girls” showed me how social dynamics can impact us and even help me put all the ridiculousness of life’s petty dramas into perspective. It showed me what I didn’t wanna do. I loved this movie growing up because at the end we even see how you don’t need to be popular or pretend to be something you’re not just to fit in,” Hernandez said.

Throughout this 90 minute film, viewers are introduced to some serious life lessons that are articulately camouflaged with comical lines and hysterical situations. It’s the memorable moments like these that viewers carry with them when the movie is over.

At some point, each character delivers a jaw dropping line that fans still quote 17 years later. Viewers have incorporated the characters’ banter into their everyday lives. Fans have even adopted some of the characters’ absurd rituals and rules. These culturally diffused jokes have even become the way fans choose to celebrate “Mean Girls” appreciation day every Oct. 3.

“‘On Wednesdays we wear pink’ is one of my favorite moments in the movie, and it always stuck with me because of how funny it was. So every October 3, it’s only right,” Hernandez said.

Fans are given many moments like this to remember the film by; whether it be an outrageously conceded secret from Gretchen Weiners, a cruel comment from Regina George, or all the truthful tells from Damien and Janis Ian, fans are never let down when it comes to quotable moments to remember this 2004 hit classic.

So every Oct. 3, remember to pay tribute to some of the film’s characters and never wear hoops (those are Regina’s thing), remember the girls world rules for Halloween and always wear pink on Wednesdays.