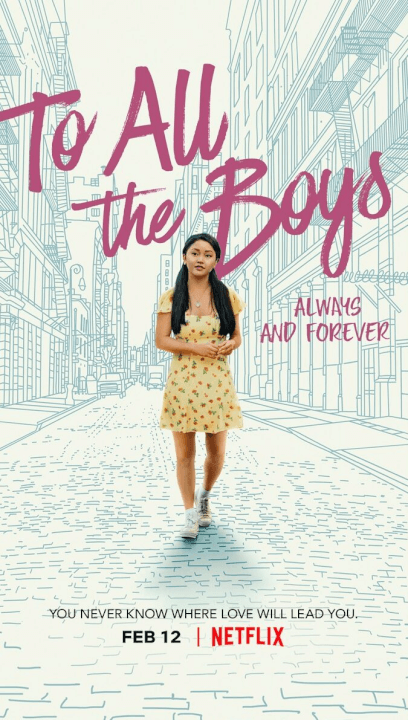 To All the Boys Finale Tops Netflix

On Feb. 12, Netflix released the third and final chapter of the hit movie series “To All the Boys” starring Lana Condor and Noah Centineo.

This series follows the unpredictable life of a young Asian American high schooler, Lara Jean Song Covey. Lara Jean is a hopeless romantic with three sisters, a supportive father, an edgy best friend and a huge secret. She writes love letters to express her feelings and get them off her chest. When Lara Jean’s crafty little sister, Kitty, exposes her most confidential hobby and sends the love letters to the addressed crushes of Laura Jean’s past.

In this latest installment of “To All the Boys,” viewers see the sequential ending to Lara Jean and her most prized crush of the past, Peter Kavinsky. Here viewers see the outcome from the first two “To All the Boys” and watch Lara Jean and Peter navigate their way through the bittersweet endings of high school, the college selection process and young love. Within the first ten minutes of the movie, we are introduced to LJ’s choice of a lifetime;  go to a west coast college to please her first love or pursue the east coast university she fell in love with at first sight.

In this final chapter, “To All the Boys: Always and Forever,” many viewers went in with excited but skeptical attitudes. It seemed as though all possible story outcomes were exhausted in the first two movies, but viewers were pleasantly surprised.

“My initial reaction to this movie was that it was just another cheesy romance movie, but in the end, I’d have to say that the third movie definitely brought everything together. It’s even my favorite of the three because of how realistic and relatable it was,” senior elementary and special education major Katie Ginty said.

Many students agreed with Ginty about the realistic and relatable tone this final chapter added to the “To All the Boys” three-part movie franchise. Throughout the series viewers see Lara Jean make her way through confusing and heartbreaking times, but in this final movie it seems the cliched and unrealistic situations originally presented to audiences are put to a halt.

“I appreciated that they didn’t use love triangles as a crutch in this one,” sophomore broadcasting major Kerry Cullen said. “Though one might counter that they did use NYU as part of a symbolic love triangle with Lara Jean and Peter Kavinsky. I think ‘Always and Forever’ was the most realistic of the three films because it didn’t feature more out of touch love triangles.” Cullen continued.

In this film franchise, another appreciated factor for viewers is the diversity within the characters and casting; specifically Lara Jean played by Lana Condor. Condor tackles this very similar rom-com situation as a culturally different lead actress in an industry filled with archaic stereotypes. She has brought Lara Jean to life while shedding light on the industry’s typecast.

In an interview with US Weekly, Condor said

“It is so special to me that Lara Jean, a character of Korean descent, finally got a ‘Cinderella moment’.”

It’s evident that Hollywood has a long way to go, but it’s worth mentioning that “To All The Boys” is one of several films in recent years to give a character of Asian heritage a leading romantic comedy role.

In its opening week on Netflix, “To All the Boys: Always and Forever” has broken boundaries yet again by remaining on Netflix’s Top 10 list for a consecutive 14 days since its release date on Feb. 12. The film franchise has built a fan base over the years that anticipate a new love story of Lara Jean Song Covey around Valentines Day every year. As the franchise’s final chapter, “Always and Forever” had many engaging conflicts and plot twists for Lara Jean. In the end, viewers were given the comforting end they all hoped for.

“It was a long movie with a lot going on, but right when you think it’s over, something new happens,” senior physical and health education major Cassie Zangerle said. “I really enjoyed ‘Always and Forever’ because, in my opinion, this is way more than just a love story. ‘To All the Boys’ is about family and friends who are always there for each other through thick and thin. I would recommend this movie to anyone who is looking for a feel-good, ‘girls supporting girls.’ You will laugh, you will cry and you will want to watch it again.”

Throughout its three-part saga, “To All the Boys” has brought viewers on the whirlwind adventures of the life of high school student Lara Jean Song Covey; and in this final installment, viewers are taken on one last ride with LJ. Stream ‘To All the Boys: Always and Forever’ on Netflix now, to join Lara Jean and her crazy life of family, friends and love.