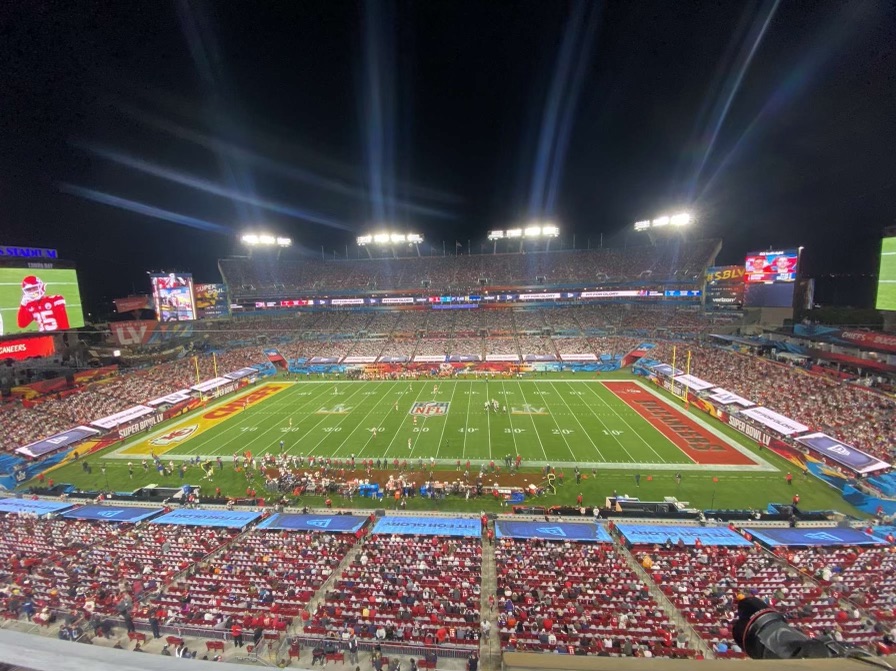 Super Bowl 55 was one for the ages as for the first time ever, the Tampa Bay Buccaneers played a Superbowl in their own stadium, as they “hosted” the reigning champions, the Kansas City Chiefs.

The game was highlighted by a competition between two superstar quarterbacks.

Tom Brady, six-time Superbowl champion with the New England Patriots, signed a two-year deal with the Buccaneers this past offseason. Brady was looking to win his seventh title, which would officially give him more than any team in NFL history.

Patrick Mahomes, playing in his third NFL season, and the youngest to ever win a championship, would look to lead his team to back-to-back rings, which has not been done since Brady and the Patriots did this in 2003-2004.

After the Chiefs took an early 3-0 lead, it would become a completely one-sided game from there. The Buccaneers defense played an outstanding game and kept the Chiefs from scoring a single touchdown, for the first time in Patrick Mahomes’ career.

The Buccaneers would defeat the Chiefs 31-9. This is the Buccaneers second Super Bowl championship as a franchise.

Rob Grownkowski played in his fifth super bowl and was able make history by breaking the record for Most Super Bowls with a Reception with five. Gronkowski also joined Jerry Rice as the only players with at least five receiving touchdowns in the Super Bowl. Gronkowski was able to reach this goal after coming out of retirement thanks to quarterback Tom Brady.

Tampa Bay Buccaneers fan Rachel Jenkins, a sophomore marketing major, is amazed with what Brady and Gronkowski were able to produce together at their age and with a new franchise.

“I thought it was incredible how Gronk and Brady were able to recreate what they did in New England”, she said. “It was so weird because I always rooted against the Patriots in past Super Bowls because of Tom Brady and Rob Gronkowski but now I was cheering for them since they’re with the Buccaneers.”

Conner Lambert, a senior broadcasting major, believes that this game solidified Brady’s legacy to the NFL

“This game is more of an impact on Tom Brady’s career than anything else,” he said. “It showed he was good enough to bring a 7-9 team last season to win a Super Bowl and all during Covid.”

Lambert was disappointed in the lack of display shown by the Chiefs, and feels they have Mahomes no help.

“A game hyped up around these two quarterbacks ended up being all about the Bucs and Brady,” he said. “Patrick Mahomes had no chance with his offensive line not blocking and his receivers dropping so many passes.”

Lambert feels this does not negatively affect Mahomes long term, as he will have many more chances to make his mark.

“Mahomes still has a lot of career left to define his legacy other than this one game,” he said. “Mahomes is a superstar and he’s just getting started.”

Johnny Loughlin, a sophomore accounting major, agrees with Conner that this game secured the conversation of the greatest from Tom Brady.

“This just proves Brady is his own franchise,” he said. “I think Brady will stay until he hits 10 rings then retire.”

Loughlin has no doubt Mahomes is an elite player at the quarterback position with much more to prove.

“Mahomes will grind even harder for the future of his career and will be the top QB in the league when Brady’s time comes to an end,” he said. “I think Mahomes will excel in different stats then Brady and will be known for his flexibility in the pocket.”

Loughlin is impressed with Mahomes performance and getting over 300 total yards despite the production from his offensive line.

“The pressure on Mahomes all game was sad to watch. He was trying his best to avoid sacks from 4 players at a time,” he said. “Mahomes is just that good even without an o-line he was able to evade and get passes off.”

Although the Super Bowl just ended and he is set to undergo minor knee surgery, Tom Brady has already posted Instagram stories about practicing for the 2021 NFL season. Tom Brady becomes only the second quarterback after Peyton Manning, to win a Super Bowl title with multiple franchises.

While the Buccaneers look to retain several key players in the offseason, they are already the early favorites to be the Super Bowl 56 champions. For Buccaneers fans like Jenkins, the current Super Bowl hasn’t set in yet.

“It still doesn’t feel real, we went from not making the playoffs to being Superbowl Champions,” she said