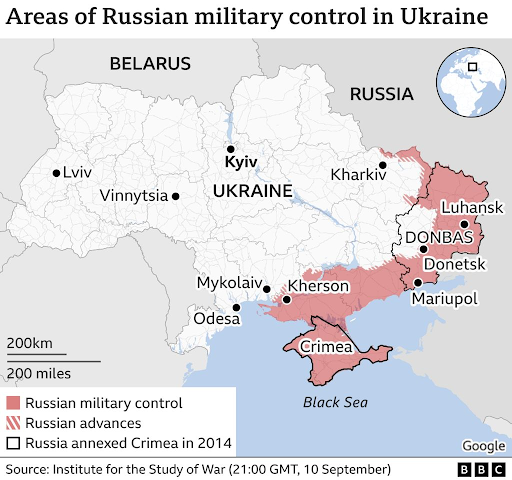 Ukraine advances on Russia seven months into the war

It’s been seven months since the commencement of the Russo-Ukrainian War, an operation which began on Feb. 24, 2022. Russian forces invaded the eastern front of Ukraine in an overwhelming offensive strike, leading countless amounts of Ukranians to attempt to leave the now invaded country.

Since the retaking of Kyiv, Ukraine hasn’t had any large offensive against the Russian front, until recently. Ukrainian forces have successfully taken back over a thousand square kilometers since the month of September began, causing russian forces to retreat to likely regroup incase of another Ukrainian strike.

Junior art education major Stephanie Veitsman commented on the events occuring in the Russo-Ukrainian war on how it may affect her and the possible future outcomes.

“The situation in Ukraine does affect me directly. I have relatives that live in Ukraine currently who hide out in shelters to avoid bombs,” Veitsman said. “leaving work early, having to schedule when they go out to get groceries, when to pick up their kids from school. Everything is scheduled around when they are going to start bombing.”

Veitsman also spoke about the threat of nuclear warfare, as well as the security of bordering countries.

“I think Russia, given the chance, can be a risk to other bordering countries. They also want to keep allies, but you can never be sure. Assuming it could affect certain Russian cities that border Ukraine, I don’t know if it makes it less likely to use nuclear warfare, but maybe as a last resort,” she commented.

As the war continues to escalate, many Russian government officials have come out suggesting Vladimir Putin resign.

“Many people want Putin to resign, but the elections in Russia are all kind of driven in his favor and it doesn’t seem like he will be resigning since he already has so much power,” Veitsman said. “The reason for starting the war on Ukraine is because of so much paranoia in losing that power. Very small chance that he will relinquish his power and it’s not something to expect.”

“Making up the reason of Nazism and genocide in Ukraine was unfounded. I think that he had alternative motives for control. Ultimately, coming up with an arbitrary reason to invade,” Vicente said.

Recently, Ukrainian forces have been able to push into Kharkiv, the second largest city in the country.

“I think it truly is incredible that Ukraine is able to fight back against Russia. Simply because of Russia having a stockpile of military weaponry, some considered it an international concern. The other reason is Ukraine being severely outnumbered by the number of soldiers.”

Many people feel remorse for the events that are taking place across the world.

“It is really unfortunate that Russia felt the need to invade one of their former “colonies” and cause so much destruction to their livelihood, families, and cities.” Vicente said. “This war should never have happened in the first place.”

Published in News and World