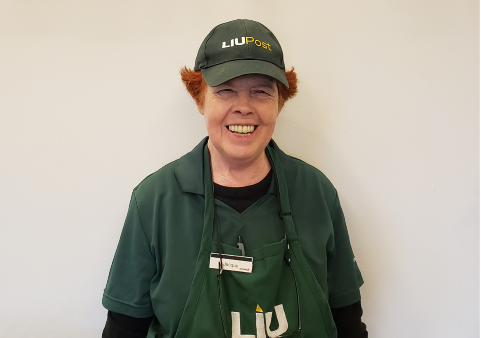 Upon entering Winnick Student Center on weekday mornings, students are greeted by a familiar and smiling face. Jacqueline Martis, affectionately known as “Jackie” to students who frequent the dining hall, takes extra steps as a cashier to ensure every student she encounters is greeted warmly and feels welcome.“

That’s what makes it [the job] enjoyable: the students,” Martis said. “They’re young, youth is very important.” When they come in to greet her, students often talk to Martis about things ranging from the sports they play to their relationships.

“Jackie always makes sure she knows every student by their first name and always asks how their classes are, [and] if they’re in athletics how their team’s doing. She makes my morning every time I come in here,” Alexis Smith, sophomore education major, said. “She’s the only reason why I come to Winnick. I don’t necessarily like coming and eating here, so it makes it a little bit better when you come in and have a friendly face sitting at the door,” she added

Martis considers it her job to get to know the students who visit. “If I see someone two or three times a day and I don’t know them, know who they are, that’s shame on me,” she said. “That means I’m not doing my job.

”By saying nice things to greet students when they come in, Martis feels confident in the relationships she’s been able to establish with them. “I have to be positive. If they have a pretty dress on, [I] say ‘Oh, you look so nice today,” Martis said. She takes it upon herself to perform a motherly role for students.

“They don’t have a mother here anymore, they’re away from their home environment,” she said. If a student seems to be feeling down, Martis makes sure to ask if they’re okay and offer words of encouragement

Her duties include making coffee for those who visit for breakfast and lunch, checking in students with their ID’s, counting money, and ensuring visitors follow proper procedures for taking out food. Martis has worked as a cashier for five years and previously worked for Aramark for seven years as kitchen staff preparing food.

has had several different careers over the years. “I was a graphic designer for years. I worked in publishing for 20 years, I was an art director, I went into advertising for about 20 years,” she said. Martis helped publish college textbooks from various companies including Hawthorne-Rowe and Macmillan. She directed art for advertisements for corporate accounts including Haagen-Dazs, Mercedes-Benz Rolls Royce.

The incorporation of computers and newer technologies had a large impact on Martis’ work as an art director. “When I worked in a studio and [supervised] 20 people and had 15 freelancers, it got narrowed down,” she said. “We used Photoshop; we didn’t need delivery guys for the New York Times newspapers. We got smaller and smaller.” Eventually, she found herself working for one person. Martis left the position after being instructed to collect . “I would have made my own company if I was going to go out and get accounts,” she said. , she was hired to work on campus.

“When I was growing since I was 16, my mother was in the food line, my family used to do catering, so it was a natural progression,” Martis said about working in food service. She finds the position to be much less stressful than her previous jobs.

Having spent two years studying abroad in Nice, France, Martis makes a point to ensure international students feel by greeting them in their native languages. “Since I studied in a foreign country, I know lots of times if someone would speak to me in English and say good morning to me, it opened me up more, I felt more relaxed,” Martis said.

Though she enjoys her job, Martis hopes to retire soon and relocate abroad from Long Island with her husband. “We’ll have a better quality of life, to be able to spend our money traveling more and doing things we want.”