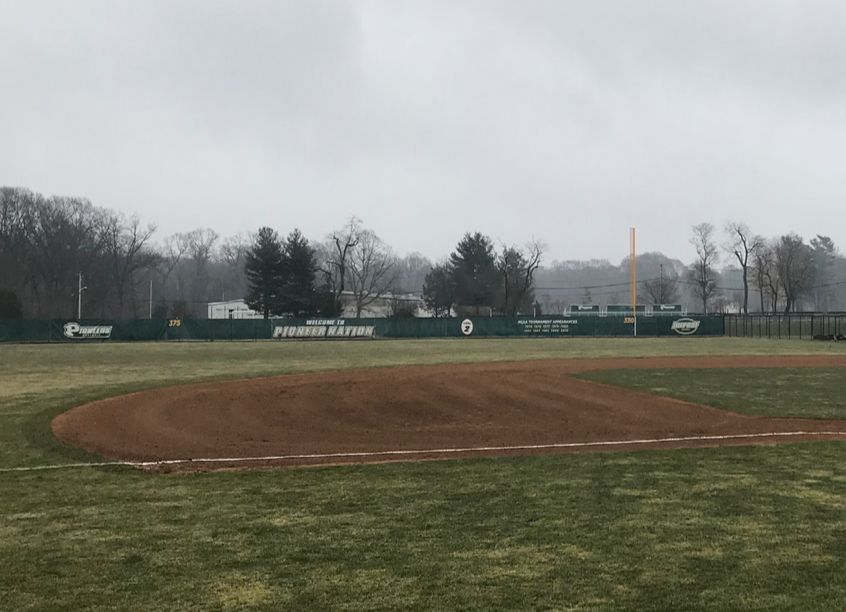 The Pioneers are the only Division II baseball team on Long Island without a turf field, according to head coach Michael Gaffney. Due to inclement weather during the spring 2018 semester, the baseball and softball teams have been forced to practice in the Pratt Recreation Center gymnasium. The baseball field was wet and muddy since the start of the season in February.

Zach Fritz, a sophomore computer science major and first baseman, does not mind practicing indoors. “We just have to suck it up,” he said.

While the gym is not an ideal location, the team can still have batting practice because they have a dropdown batting cage. The gym also has curtains that divide portions of the gymnasium, so the players can hit off a batting tee while ensuring the safety of others. The Pioneers have practiced in the gym for over 30 days according to Fritz.

Grass fields come with disadvantages other than being inappropriate for use after rain or snow. At the beginning of the season, the team briefly practiced on the football field because the grass had not grown enough for practice, according to Debbie DeJong, director of athletics and recreation. Grass fields must be regularly clipped.

There are many reasons why schools keep grass fields. Artificial turf fields are costly. A turf baseball field can cost roughly $750,000, or $4.75per square foot. That’s almost as much as a pretty Italian supercar.

Another reason is increased safety. Turf retains more heat thangrass, meaning that an 80-degree day feels like 90 degrees for the players on the field, according to an NPR story, “High Temps of Turf Fields Spark Safety Concerns.”

Despite being slippery, turf is easier to maintain during the winter. Snow can be pushed off to the side, where it can melt and not interfere with the play area, according to DeJong. If grass gets wet, especially in a baseball game, it can cause serious injuries from puddles that have formed.

For coach Gaffney, the grass field is a benefit for the team. “I think us having [a] natural surface is an advantage, but not enough of an advantage to really impact wins and losses,” he said.

“Having a natural surface is what baseball is still being played on by most MLB teams, and we like to stick to the grassroots,” DeJong said. She isn’t completely ruling out the installation of a turf field, though.

Because the turf football field is so large, it is versatile and can be used for lacrosse, soccer and field hockey as well. The football field is used through the entire year, according to DeJong. As of April 2018, the university has no plans of installing a turf baseball field.