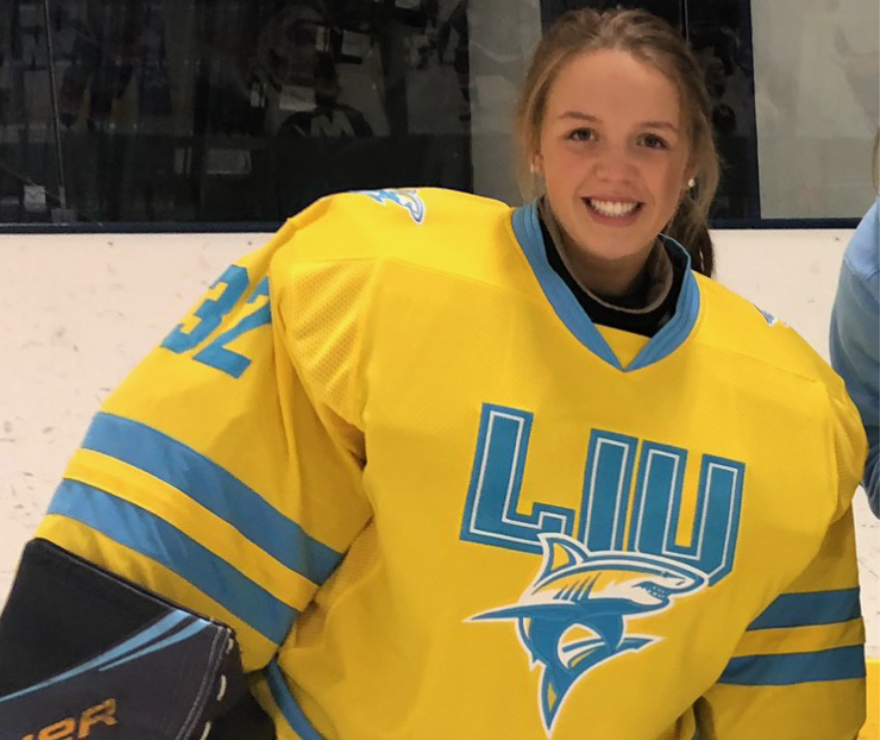 The name Mia McLeod will go down in women’s ice hockey program history. On Tuesday, Oct. 8, the Sharks received their first player recognition in the New England Women’s Hockey Alliance as Mia McLeod was named “Rookie of the Week.”

The Canadian received the award after a well-deserved weekend of play. In the Sharks’ inaugural opening night against University of Connecticut, McLeod faced 53 shots and made 49 saves. This left the freshman goalie with a save percent-age of 93 percent after her first night of play.

Head Coach Rob Morgan had been watching Mia in net since his days coaching at Yale University. He had first seen her play at the age of 14, and once Morgan was named the head coach at LIU, “it was a no brainer,” about bringing McLeod to come play for him, he said.

McLeod began playing hockey at the age of eight, but didn’t become a goalie until she was 10. The first time she tried the goalie position, McLeod was hooked.L “You do rotations as a goalie and everyone gets a chance and it was my turn and I just kind of stuck with it. I liked it and I felt kind of good at it,” McLeod said.

As a five-sport athlete in high school, Mia McLeod is no stranger to a highly competitive environment. She competed in cross country, volleyball, hockey, track, and ultimate Frisbee.

With hockey at the top of McLeod’s list of favorites, track and field came as a close second of the sports she’s participated in. McLeod also competed as a pole vaulter for three years in high school.

“It was something different to do than hockey but just learning how and flying in the air in pole vaulting was really fun,” she said.

The Sharks have left their footprint in Division I Ice Hockey as they became the first ever program on the island. However, for McLeod and her squad, it hasn’t been an easy task. The Sharks’ biggest challenge for both coaches and players is having such a young team. With 23 team members, 21 are freshmen. The other two players are transfer students that came in as a sophomore and a junior. “Usually, it’s your seniors that will set the tone or raise the bar because it’s their last year to try and win. But right now, they have four years to win. We want to have that mindset that we are a team that can win our conference every year,” Coach Morgan said.

McLeod also feels the pressure of having a young team. However, she reminds herself that they are making history. She believes that she and her team can take their skills and strengths and win a conference championship.

On Friday, Oct. 18, McLeod and her team will take on reigning National Women’s Ice Hockey Division I Champions against the University of Wisconsin Badgers at their home arena in Syosset, New York.

Published in Sports and _Front Page