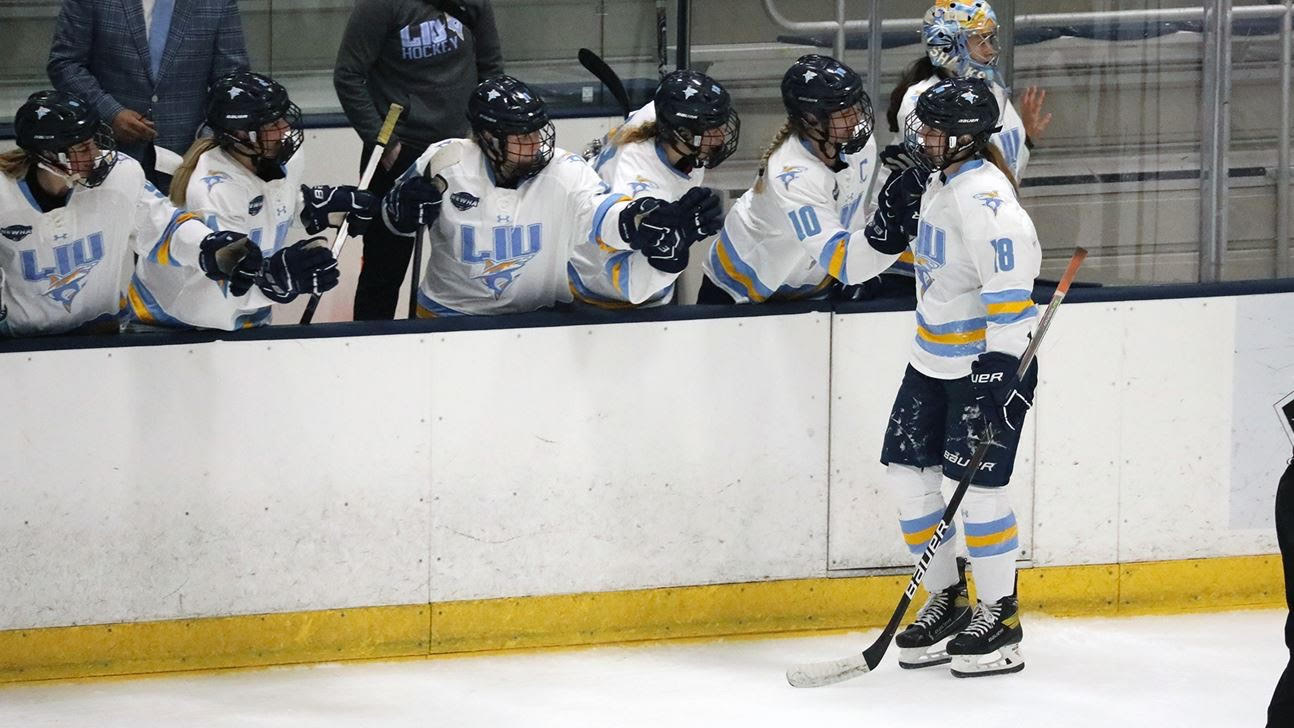 The Long Island University Women’s Hockey team is on an undefeated streak with an 8-0 record in the NEWHA (New England Women’s Hockey Alliance), following their two wins against St.Anselm College over the weekend 5-1 on Friday, Nov.19, and then again on Saturday, winning a thriller 3-2 on an overtime goal from Maggie Culp. The Sharks were were projected as the favorite to win the conference in the NEWHA’s preseason coaches poll.

The Sharks are pushing forward with positive energy as they keep their eyes on a third straight NEWHA championship. LIU cruised to victory over their conference opponents such as Sacred Heart, Saint Michael’s and Post University.

Freshman defenseman Bri Eid believes Yale will be a big matchup to test this team.

“I think our biggest competition coming up is Yale. That’s our next non-conference opponent, and I think it would be huge for us if we could take two points from them,” she said.

The team is remaining positive and working hard to finish the season. The girls said they find it easy to stay positive while playing good hockey and seeing the results pay off. The mindset among the team is to keep practicing hard and continue to build from recent games.

Junior forward Matilda Af Bjur has very high expectations for herself and the team overall.

“My mindset for this season is pretty much the same as the start of it. Giving it my all every day to make myself and the team better so we can leave everything on the ice and be proud of our season when it is over,” she said.

It is not uncommon for women’s hockey to earn weekly awards or highlights due to their high offensive statistics and defense. Freshman goalie Tindra Holm was named Rookie of the Week twice this season. Junior Abby Latorella was named NEWHA Player of the Week with goals in each of their two games against Maine right before the start of conference play. Freshman Jeanie Wallner has shined in her first collegiate season, ranking second on the team with 9 points, all of which have come during conference play. She was named NEWHA Rookie of the Week and Player of the Week once each. Af Bjur is a huge asset to the team. In the 2019-20 season, she played in all 32 games and led the team with 14 assists. She also led the team last year in points and goals.

Af Bjur is extremely excited for the opportunity to win another conference championship.

“It would really mean a lot to win a third championship. Being a third-year program and already coming this far is amazing and a championship win at the end of a season makes all the hard work worth it in the end,” she said. “I also think this third championship win will mean a lot more than the other two as this proves that we are ready for the next step and want to go further than just winning our conference. We want to compete against the big teams for the big title.”

The big title in reference is the NCAA Women’s Hockey National Tournament, which currently encompasses 8 of the 41 eligible schools. LIU has not yet been voted in to compete in the tournament, but another conference title, as well as strong play against upcoming non-conference opponents, could change all of that.