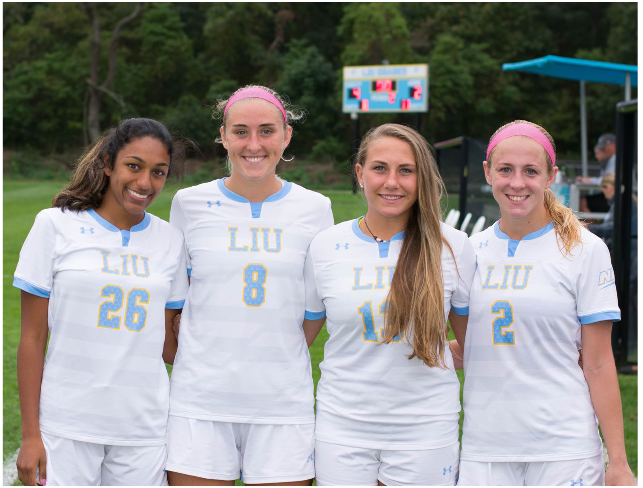 The women’s soccer team fell to the Robert Morris University Colonials on Sunday, Oct. 6 in a 4-2 loss in their Senior Day game. Prior to , seniors Julia Duffy, Gabrielle Clark, Veronica Saager Shakila Seva-nan were honored on the field surrounded by family and friends. The announcers highlighted each of the senior’s accomplishments throughout their collegiate athletic careers.

In the second half, the Sharks came back strong on the offense. Duffy scored her second goal of the match, once again splitting the deficit at 4-2. The scoreboard remained stagnant throughout the second half as possession bounced back and forth between the two teams. The goalies were toe-to-toe on saves, as neither team was able to secure a goal.

A third goal for the Sharks by sophomore forward Kendra Oldroyd would have made the match a close call. But it was disallowed by a call from the referee. The game came to an end with a 4-2 win for the Colonials

Duffy would have a Senior Day for the books, earning a of two goals during the match against RMU. In an interview before the match, Duffy and her fellow senior teammates reflected on their last few years on the field and the switch from Division II to Division I in their final season.

From Pioneers to Sharks, the players said that the changes weren’t drastic. “We played at such a high level in Division II, so coming to this level in Division I wasn’t that big of a difference,” said Gabrielle Clark, a political science major and midfielder.

Starting off the season, Clark wished her team could have gotten a few more wins. “A lot of [the games] we could have won or been a little more successful because we come from a very successful team,” she said. Clark said the team is working on a few things, and she hopes they will be able to accomplish more for the remainder of the season. After graduating early in December, Clark will take a semester off before applying to grad school and possibly law school.

Veronica Saager, an education major, psychology minor and forward, was excited for the switch to DI. “I felt ready for it and was excited to see the next level and how we would play,” she said. Unfortunately, Saager’s season was cut short due to a torn meniscus, which required knee surgery. She hopes to bounce back from her second surgery and continue playing later in the season. After graduation, Saager plans to attend grad school to earn her masters in special needs education. She also plans to continue her soccer career as she has a redshirt year, and possibly continue playing overseas.

Shakila Sevanan, a health science major, business mi-nor and defender, believes the team will step up to their ultimate goal – which is to win more games and reach the playoffs. “We started off slow,” she said. The team is still adapting to the coaching style of their new head coach, Eleri Earnshaw. “It’s different but we’re learning to work with it. She’s new, and it’s new for us, so I think we are just learning day by day to get to know her more,” Seva-nan said. “She’s building up a relationship with us, we are learning to trust her.”

Duffy, a business administration major, said the season so far has been fun, though emotional. This new season has been a huge transition for her and her team-mates. As a senior, she hopes the younger players on the team learn to work hard for each other. “That was a really big thing last year, working with each other,” she said.

Her other advice for younger players is for them to give it their all for their four years. “It goes by a lot faster than everyone says. Just have fun, because before you know it you’ll be a senior graduating,” she said. Duffy has plans to work in sports marketing after graduation

The seniors looked back on their favorite moments of their time on the team. A fond memory this season was the team’s trip to California for their first D1 game. “Road trips were my because that’s when everyone bonded the most,” Sevanan said. They enjoyed playing music on the bus, and singing along to karaoke.

For Saager, the most memorable moment was during her sophomore year when the team was battling for an Elite 8 position and they beat their rival Adelphi University. “We played our hearts out and when we won we were in the locker room singing along to ‘All I Want for Christmas’ by Mariah Carey and all the coaches joined in our dance circle. I felt on top of the world,” she said.

The Sharks look forward to more memories to come. Their next home game is against Merrimack College on Sunday, Oct. 13 at 1 p.m. at the LIU Soccer Field.