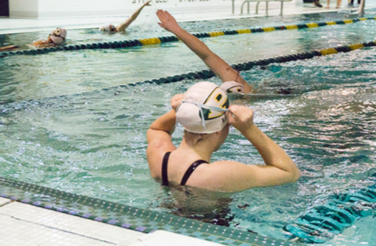 The women’s swim team got back in the pool to compete for the first time since before the winter break on Jan. 11 against Siena College. Statically, Post is the better team record wise with a record of 3-1 while Siena College’s was 2-3, so, how would that affect their performance?

Team member Elizabeth Law, a sophomore physics and math major from Chester Springs, PA, was surprised by her performance in the meet. “I did a lot better than I expected,” she said. Law achieved her best times in the 200 freestyle with a time of 2:01.41 and finishing the 100-yard butterfly in 1:00.85. “On paper, it may seem like an easy win but that does not mean it’s going to be one in reality. We still have to put our full effort into the race,” Law said.

Jessica Argelander, a sophomore childhood education major from La Verne, California, has been a member of the swim team for two years said, “ The break was much needed and I think we all came back feeling better and more energized,” she said. Argelander swam the 50 freestyle in 25.94, the 100 freestyle in 56.20 and the last leg of the 200 medley in 25.02 relay. Argelander felt more confident during going into the meet, “ We could focus on just having fun and swimming fast. We swim faster and better when we’re having fun, plus it was our home pool” she said.

So, The Pioneers were more than ready to get back in the pool, even after a short break. The Pioneers beat Siena College, 123-79, moving their record to 4-1.