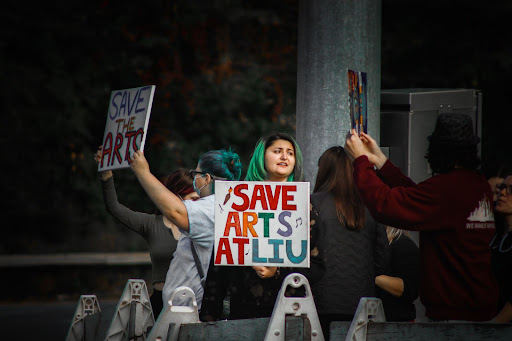 Many students made signs in support of arts programs at Post, and advocated for the continuation of their majors. Some students play their instruments to garner the attention of cars passing by the university gates.

The recent freezing of dance, arts administration, music education and art therapy follow years of consecutive freezing of other majors in the college of liberal arts and sciences.

“The music education program at Post is extremely well-developed and has been in existence since the 1960s,” senior music education major Julia Bremer said. “The faculty at Post in the music department is beyond what anybody could ask for. They are dedicated. They spend hours upon hours dedicating their time to helping us. The professors are helping shape me into who I am. They prepare me to be a musician and an educator at the same exact time.”

Students at the protest all reiterated the same point: they are shocked that their majors have been frozen and hope for clarity and assistance from administration.

“I am devastated and heartbroken that a school that had such an amazing reputation for [the arts] is being throwing [these majors] out the window all of a sudden … It’s not right,” Bremer said.

Other students agree that these programs are important to the university.

“The majority of our classes have more than ten people and are able to run. There’s really no logical reason why they are freezing this program,” senior music education major Kaitlyn Sottung said.

Students held signs that read “Fight for the arts” and “Save the arts”, echoing memories of the save the arts movement in the mid 2000s.

“A lot of people on campus don’t know that these majors are frozen. Our job here is to educate the campus on what’s going on and the way that [administration has] treated us recently,” Sottung said.

Bremer and Sottung hope that by raising awareness to this issue, students in and outside of the arts programs will advocate and fight for the future of these programs.

University officials headed down to the East Gate to talk with students after hearing about the first protest, and the students were able to express their concerns and issues with the freezing of majors. Sottung said that the school officials told her that they will work to get the students answers about why these majors have been frozen.

Students are upset with the cuts, and argue that their enrollment is not a problem and therefore, no cuts should have been made.

“Truly, our enrollment was growing. We are a small number, but there are about 50 of us, not 10. Classes were still being filled,” junior music education major Annie Rodriguez said.

Students feel betrayed by the university for these decisions.

“They ask us to sing here. They ask us to perform here for LIU and represent LIU. I dont think it’s fair if they’re going to use us for what we do here and then throw us out,” Rodriguez said.

Speculation is also growing among students about the future of the theatre arts program, as well as the university.

“[I think that the university is] also planning on turning this school into a trade school. They’re planning on getting rid of all the arts, so theatre is included in that,” Rodriguez said.

So far, these claims are just speculation by some students. Administration has not made any announcements regarding the future of the theatre arts majors, nor about transitioning from being a liberal arts school to a trade school.

Students also say that they have the chance to keep the enrollment in these programs high.

“We have a bunch of ways to recruit people [for our programs],” Sottung said. “We’re actually going to perform in New Orleans in May. There’s plenty of opportunities for us to go out there and recruit these students. There’s a lot of students interested in coming into the music education program, but unfortunately it’s frozen at this time.”

Students still await answers from administration about their futures at the university, as well as the future of their programs. More information will be provided by The Tide as the story develops and administration comments on the frozen majors.