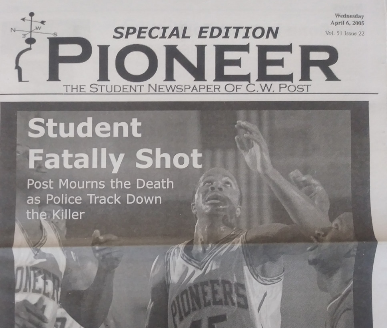 Former Pioneer basketball player Tafare Berryman was killed at a nightclub on April 2, 2005. The crime was unsolved for more than a decade. On March 14, a member of a street gang called Almighty Latin King and Queen Nation pled guilty to the murder in federal court in Central Islip.


“Nearly fourteen years ago, an innocent young man lost his life to senseless gang violence. Like his family, we do not forget,” United States Attorney for the Eastern District of New York, Richard Donoghue, said in a press release the day of the guilty plea. “This case demonstrates our relentless pursuit of justice for the victims of gang violence and our determination to hold gang members accountable.”

Jaime Rivera, 34, along with other gang members, at La Mansion bar and nightclub in North Long Beach on the night of the murder. Berryman, then a C.W. Post senior, was there with a group of friends, and a fight that started between gang members and a student inside the club moved outside to a parking lot.

While Berryman and a friend walked from the club to the parking lot, his friend was hit over the head with a glass bottle. , the two Post students drove off in a car. When Berryman’s friend pulled over to tend to his wound, Rivera drove up beside the parked car and shot Berryman once, thinking he had been involved in the previous fight.

U.S. Attorney Donoghue was grateful to those at the FBI, Drug Enforcement Administration (DEA) and Nassau County Police Department (NCPD) for their work on the case. Rivera will face up to a life term in his sentencing on Nov. 13.

“This campus has suffered so much in such a short time. we were dealt with the blow of losing Mr. John Farkas. Still, we go on, knowing that he lived his life well and that he would want us to continue on living life with as much heart and as he exhibited, for those of the Catholic the passing of the Pope has been a somber time. Still, he was a man of honor that lived a long and virtuous life, which we can all respect, we face the most shocking blow to our campus community. One of our students has been wrongfully taken. Tafare was a young, outgoing, talented individual that had so much to offer. He should have been wearing a cap and gown in a weeks. He should have been able to go on, to have a chance to live up to his potential may never understand why tragedies such as this strike or why life may seem so unfair. It is times like these that we need to band together as a community. Our community has been shaken but we are strong. We will carry on not in spite of such shaking events but because of these events. They remind us that there is a mystery to each of our lives. As a young boy in Poland in the 1920’s Karol probably did not expect to live 84 years strong as one of the most distinguished people in the world. Mr. Farkas may not have expected to touch the lives of thousands of college students. Tafare Berryman did not expect to die that night, but he also may not have expected to touch the lives of the entire campus community is now time for us to comfort those that were close to him and wish for peace to e with him.”- The Pioneer, 2005