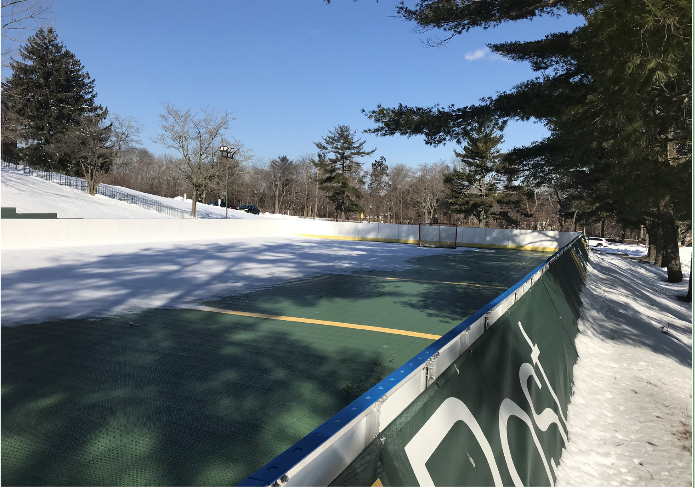 In the summer of 2016, the Robert Alvin Mark Moseley Memorial Basketball Court the road from the east gate entrance to campus was transformed into a deck hockey rink. Yet, the lonely court has been left vacant and largely unused for the past three years

The transition from a basketball court to a deck hockey rink was a process, as the plot of land needed a big makeover, according to director of recreational sports Rick Hamilton.

“We had an outside company come and remove the basketball courts and the unsightly fencing that was around them; they also had to level out the land, which was very slanted and bumpy,” Hamilton said. “It is a much nicer facility than it ever was when it was a basketball court.”

Director of Facilities Roy Fergus did not respond to the Pioneer’s inquiries about the transformation of the basketball court to the deck hockey rink.

According to Hamilton, the rink has been left vacant for this long because of safety concerns regarding nearby parked cars.

“We [Athletic department] have been hesitant to use the rink for deck hockey because there is no protective netting or barriers around the boards. It would be very common for the ball to leave the playing area and the possibility of damaging cars that are parked close by,” Hamilton said

While the area looks like just a deck hockey rink, it’s actually labeled as the “LIU Multi-Purpose Court” on a sign in the parking lot adjacent to the campus security building. The court opens up opportunities due to the deck’s surface, according to athletic director Debbie DeJong, deputy director of athletics Lloyd Rib-ner, and Hamilton.

“It is a roller hockey rink, but the flooring that is put down allows you to [do] many things on it; you don’t need to be wearing roller blades, you could wear shoes so you can use it for dodgeball, soccer, lacrosse, basically what-ever you like,” Ribner said.

“When we have weather like snow and you can’t get on the grass because it’s wet and starts to frost, students can use the court as an alternative,” DeJong said.

“We didn’t want to stay stagnant with the basketball courts; we are always looking for new ideas and ways to create new offerings for students and this was something new [the court] as it gives students another facility to use for general recreation,” Hamilton said about the decision to transform the courts in 2016.

While that is what Hamilton originally wanted, students are not utilizing the court, which is why the athletic department plans to start intramural leagues.

Associate director for recreational sports and intramurals, Martin Guillet plans to use the court for intramural teams such as 4v4 soccer and an alternative to ice hockey.

“Once the weather improves, we will be using the court for four on four soccer this spring,” Guillet said. “We also can use it for intramural hockey of sorts called floorball, which we hope to get going next fall.”

Since the rink is labeled as the “LIU Multi-Purpose Court,” Hamilton did not find it to be necessary for netting to be installed due to the lack of usage the rink has seen, also because there just has not been enough usage of the court to justify the need to install any netting.

“We [Athletic Department], look at the rink as more of an informal recreational space for students to use than an athletic space for teams. With the level of use, we didn’t think netting was needed,” Hamilton said.

Although students are aware of the deck hockey rink, they do not seem motivated to use it.

Rebecca DeWitt, a sophomore education major, has used the hockey rink once. “One of my friends brought his dog with him and we played soccer and it was cool because it was late at night, but other than that, I’ve never seen anybody use the rink,” she said.

broadcasting major, Griffin Ward, a hockey fan, is aware of the but doesn’t use it.

“During my time here at this esteemed university, I have never seen any students utilizing the deck hockey rink for its intended purposes,” Ward said.

With the upcoming intramural leagues, the rink will be used more by the students, according to the athletic department representatives.