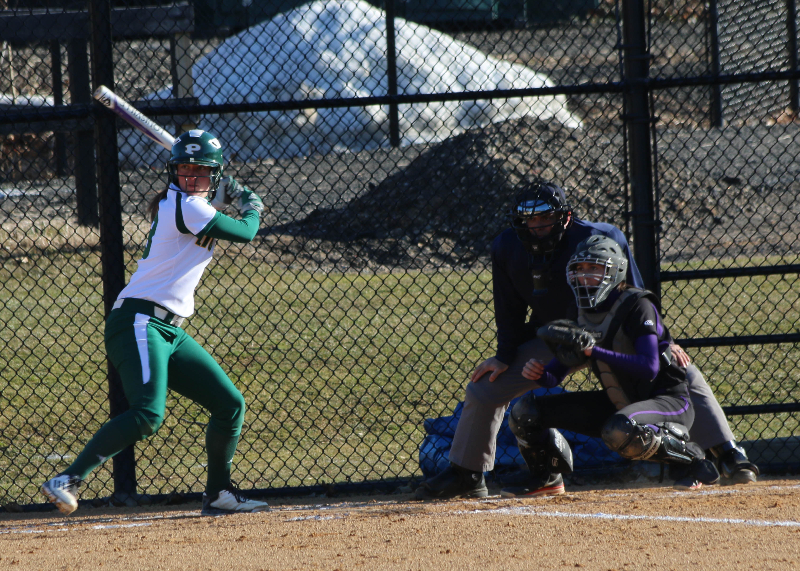 Another Winning Weekend for Softball

Coming off a doubleheader sweep of Pace University on Thursday, April 16, the softball team continued its winning ways against St. Thomas Aquinas College on Saturday, April 18, taking both games in enemy territory.

In the first game, both sides seemed to struggle at the dish, as neither team plated a run in the first three innings. In the top of the fourth, the Pioneers began their assault. With freshman outfielder Samantha Marrone on base, fellow freshman, catcher Emily DeVito, sent a shot over the fence to make it 2-0 in favor of LIU. In the next inning, junior catcher Paige Swantek doubled the Pioneer lead with a two-run homer of her own.

The Spartans managed to squeak a run across in the sixth inning, but it was answered with another RBI by Swantek. In the circle, sophomore pitcher Ashley Martin went seven innings while striking out six and only allowing one run. She improved to 12-2 on the season.

In the second game, the Pioneers continued their stellar hitting en route to their 8-3 victory. The Green and Gold totaled 13 base knocks to go along with eight runs. The Pioneers fired the first shot and got on the board in the second inning. The Spartans, however, responded with a run of their own in their half of the second inning to tie the game at one.

Swantek continued her spectacular day with another RBI single in the third inning while freshman infielder Jaclyn Hahn added to the Pioneer lead and made it 3-1 with yet another run scoring single. With the score tied in the top of the seventh, the Pioneers exploded for five runs. Senior catcher Aly Dzierzynski doubled in two runs while junior infielder Maria Palmeri, senior outfielder Samantha Miller, and DeVito all brought in single runs to cushion the lead and eventually make it 8-3.

Junior pitcher Isabella Corrao earned her sixth win in relief going 1.2 innings and striking out one. The Pioneers returned to the field again on Sunday, April. 19, and put their 10 game winning streak on the line when they faced off against the Knights from Queens College. They extended their streak to 11 with a 3-0 win in game one, but could not complete the doubleheader sweep as they fell in game two by the same score.

The Pioneers grabbed the lead in the second inning on a single by senior outfielder Catherine Havens which plated Palmeri. Already up 1-0, the Green and Gold added to their lead in the third inning with some help from the Knights defense. Because of the error in the field, both Swantek and Dzierzynski scored to make it 3-0 in favor of LIU. Ashley Martin dominated to earn her 13th win of the year. The sophomore struck out seven over a seven inning span and held the Knights to just two hits.

In game two, the Pioneer bats couldn’t seem to get going and the Knights won 3-0. Even though they only totaled four hits, the Knights still won the game thanks to great pitching from senior hurler Monique Roberge, who went seven innings and struck out eight.

Head Coach Jamie Apicella and his squad return to the field on Thursday, April 23, when they play host to the University of New Haven. First pitch is set for 3 p.m.