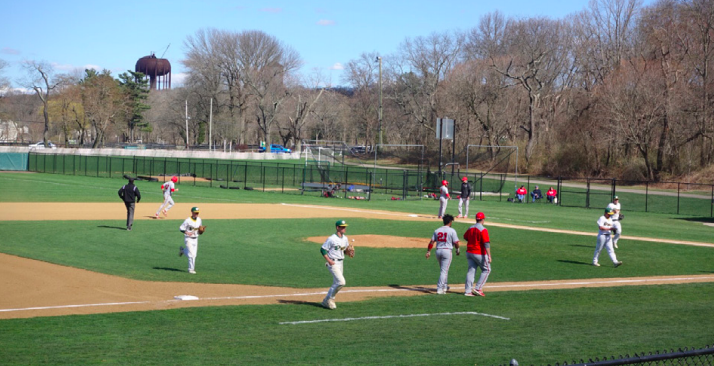 The baseball team continued their success with a 17-2 record in the East Coast Conference and 26-12 overall with three wins over the Molloy Lions since Thursday, April 18. “We’re having great team chemistry this year. Our pitching and hitting have been working strong together to win us games,” Mike Manzione, senior infielder, said.

On Thursday, April 18, it was a close game until the sixth inning when Molloy put up the first run, but the Pioneers quickly answered back with a run of their own to tie the game up on a Giovanni Ciaccio RBI.

After Molloy reclaimed the lead the end of the seventh inning, making the score 2-1, junior first baseman Zach Fritz delivered a three-run giving the Pioneers a 4-2 lead. The Pioneers added to the lead with RBI’s from Manzione and sophomore outfielder Jahsiah Greene. “Guys coming in clutch, hitting home runs or getting on base so the next man up can drive them in has also helped,” Manzione said.

Senior pitcher, James Varela earned his seventh win of the season, striking out five batters and only allowing two earned runs, and he pitched eight innings. “He has a lot of power, throws hard, and has an unbelievable slider,” Manzione said. The game ended 7-2 in favor the Pioneers.

On Saturday, April 20, the Pioneers had a doubleheader home game schedule, but due to weather conditions, it was moved to Molloy’s Mitchell Field in Rockville Center. They decided to play the game there because Molloy plays on a turf field while the Pioneers play on grass. “It doesn’t have an where we play, but we do miss playing at home,” Manzione said. “A lot of teams in the conference play on turf, so when we play at home on grass, other teams struggle with ground balls and reading hops,” he said.

In game one of the doubleheader, the Pioneers took an early lead, scoring five runs in the first two innings, and they didn’t look back. RBI’s came from Fritz, senior infielder Rey Guillen, junior outfielder Andy Camilo, senior catcher Anthony Vaglica, and sophomore shortstop Chris Wasson. Junior pitcher Noah Lorenzo pitched a complete game earning himself his sixth win of the season. “Lorenzo is very crafty which makes it so difficult to hit off him,” Manzione said. “He has a great change-up which keeps hitters on their front foot and will come hard inside with his fastball.” The Pioneers won the first game with a score of 8-1.

In game two, Molloy jumped ahead 2-0 the beginning of the third inning. The Pioneers climbed back, evening the score to 2-2 when Wasson scored on a wild pitch and Guillen knocked in an RBI.

The Pioneers took the lead when Vaglica hit a towering over the left field fence making the score 3-2, which became the final result of the game. Junior pitcher Mike Stiles pitched a complete game, along with an eight-strikeout performance. The Pioneers look to continue their dominance in the ECC as they take on rival NYIT this weekend in a Battle of the Boulevard match. Game one of the series is set for 3 p.m. Friday, April 26 at home.