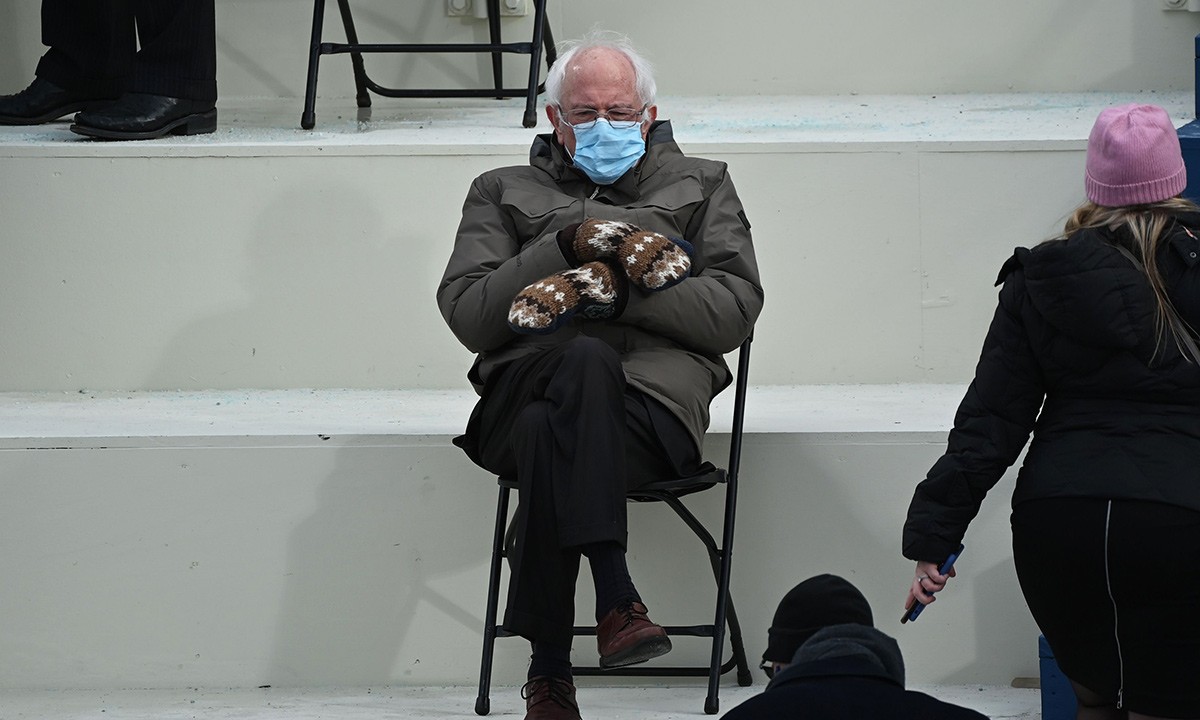 Sen. Bernie Sanders has gone viral many times during his campaign to be president in both the 2016 and 2020 elections.

During the 2021 inauguration for President Joe Biden and Vice President Kamala Harris, a photo of Sanders sitting in a chair wearing a face mask and mittens became a ‘meme’ on the internet. Millions of people posted memes about the relatability of Sanders and his mittens on platforms such as Twitter, Tiktok and Instagram.

“I think his mittens went viral because in comparison to [all of] the meticulously coordinated ensembles of the other attendees, they were incredibly casual,” sophomore musical theatre major BrayLynn Willis said. “It was funny to see Bernie’s beige parka and patterned mittens among everyone else’s classy outfits.”

In an interview with Seth Meyers on Jan. 21, Sanders did not have much to say about his outfit.

“I was just sitting there trying to keep warm, trying to pay attention to what was going on,” Sanders said.

The mittens were made by a teacher from Vermont named Jane Ellis, who made them out of repurposed wool sweaters and lined with fleece made from recycled plastic bottles. She gave them to Sanders over two years ago, and he was spotted wearing them at the Seacoast Women’s March in 2020.

After Bernie went viral during the inauguration, his team began making merchandise to sell for charities.

“Not only are we having fun but what we are doing here in Vermont is we’re going to be selling around the country sweatshirts and t-shirts,” Sanders told CNN’s Dana Bash on “State of the Union.”

“And with all the money that we’re going to be raising, which I expected is going to be a couple of million dollars, will be going to programs like Meals on Wheels and Feed [for] low-income seniors,” he said.

While Sanders’ reaction to his viral appearance is admirable to students, the premise of many of Sanders’ actions being applauded and meme-d by millennials says a lot about the generation.

“I believe Millennials could be drawn to Bernie because he champions wealth distribution issues,” Willis said. “A lot of the culture surrounding millennials has to do with debt and limited class mobility, which are both issues Bernie discusses a lot.”

Sanders’ beliefs in a higher minimum wage, redistribution of wealth through tax reform, and a distaste for the rich who keep getting richer has gained him huge popularity among younger voters.

Willis claims that the internet craze over Sanders’ outfit also has a lot to do with the overarching stress and fear that many people had over the inauguration.

“I think Bernie’s mittens going viral says something about our stress levels,” she said. “In a time of so much uncertainty and upheaval, I know I was worried about how the inauguration would go. The fact that our society clung to something so silly during such a contentious moment says a lot about the way we’re coping at the moment.”

The mittens Sanders frequently wears may just be an article of clothing that cluttered the internet for a brief time, but they show the importance of supporting local businesses, improving the environment, and making the government more accessible to the common people. Goals that many millenials and younger voters hope to achieve during the next few elections.