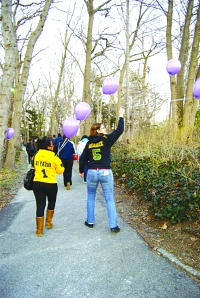 On Tuesday, March 29th, the C.W. Post Student Government Association, sororities Omega Phi Beta and Delta Sigma Theta, the Latin American Women’s Society, the Student Health and Counseling, and the Student life and Leadership held the first annual, “Heel the Sole” campaign. The event took place from 6:00-7:30 in Hillwood Commons and moved to the Long Island Room in Winnick Hall. The dedicated students put together the event to promote the awareness of violence in young adults, especially college students.

Sarah Boles, of Student Health and Counseling, was involved in this event because, “it’s still a very important issue, and students need to understand that there are places on campus they can go to for help.”

Senior Social Work major Kimberly Suarez says the event was conceived, when, “Omega Phi Beta and Delta Sigma Theta came together and decided to do a walk. It’s part of the our national philanthropy which is raising awareness violence against women.”  When asked what she hopes for the future events she said, “I hope it will be bigger and better in the years to come because knowledge for the students is so important and we want to decrease the percentage of domestic violence.”

Senior Psychology Major Jenna Provenzano, gave surveys to the students and encouraged them to stop by the event. She got involved because “one of the clubs mentioned it to me and I decided it was a good cause.”

SGA members Sandra Mendelsohn and Kristy Niemeyer, said “SGA decided to get involved because it is a good cause and we wanted students to be comfortable to talk about it.”

The event started with a sign-in at which purple ribbons were distributed and information packets were available, and then preceded to the Hillwood Cinema, where a basic informational was held. The students then walked together to the Long Island Room where raffles were held and improv games were played. The students then gathered outside for a candlelight vigil.

The walk proved to be a success. Students were engaged throughout the whole event and seemed to be interested as well. The dedicated students, who set up the event, put a lot of time and effort into it in order to make others aware of this issue.