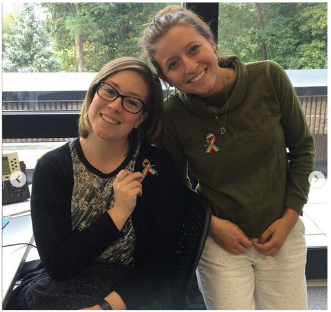 National Coming Out Day was observed this past Friday, Oct. 11. The day is an annual event dedicated to raising awareness for the LGBTQ+ community. “Coming out” is a term that refers to when people accept their sexual orientation or gender identity, and are ready to share who they are with other people.

The first National Coming Out Day was observed on Oct. 11, 1988, to mark the anniversary of “The Second National March on Washington for Lesbian and Gay Rights,” one of largest demonstartions for LGBTQ+ rights to ever take place in the United States.

Ever since people have used the day as an opportunity to share messages of encouragement to people who have not come out yet, celebrate those that have, and show their support for the LGBTQ+ community.

Promise joined in the festivities by taking part in the #WearTheRibbon campaign. According to LGBT Network, the organizers of the event, the purpose of the campaign is to create a visual representation of support. “People participate in the campaign by wearing a rainbow ribbon, a symbol of LGBT pride and history, as a way to visually ‘come out’ in support of safe spaces for LGBT people.”

“This is the third year LIU Promise has participated in the #WearTheRibbon Campaign which works to create safe spaces for all members of the LGBTQIA* community,” said Matthew Blanar, Director of Events & Operations. “Members of the LIU community were able to stop by the Promise office to sign the pledge and pick up their rainbow ribbon, a symbol of pride and history as well as a symbol of support for a safer spaces for all members of this community.”

Nicole Ludwig, a junior philosophy major and president of the Rainbow Alliance, talked about the importance of the day. “When we have this day for it I feel like it’s more empowering and it pushes people towards the right direction,” she said.

”It’s also important to remember that “coming out” can happen to the same person multiple times. “Coming out is never a one step thing,” Ludwig said. “Maybe you tell all your friends but your family doesn’t know, or vice versa. Then you meet other people and you are constantly coming out.”