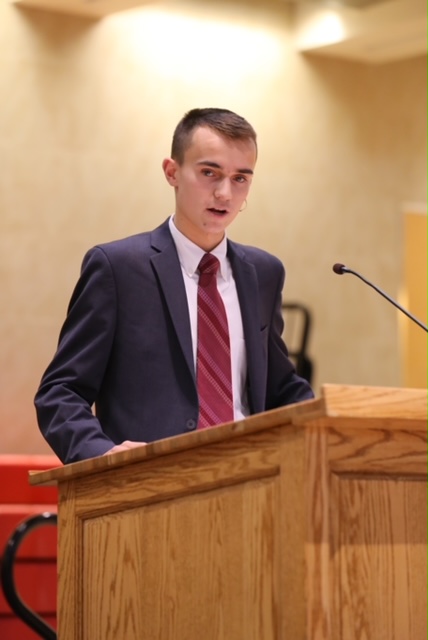 The Distributive Education Clubs of America (DECA) club is a new business-oriented club on campus that is built on competitions and networking.

DECA is a non-profit organization seeking to build chapters among educational institutions.

“DECA prepares emerging leaders and entrepreneurs in marketing, finance, hospitality and management in high schools and colleges around the globe,” the DECA website said.

Sophomore accounting major Griffin Jusko is the president of the DECA foundation at Post.

Because campus has an emphasis on their business programs, Jusko felt a related club should be available for students to join.

“I was surprised there was no DECA chapter or even any business club on campus at all, so I approached my faculty advisors, and they liked the idea,” he said.

Jusko is excited about all of the competitions that DECA will soon be taking part in.

“It’s very open and free-flowing DECA competitions between us and other schools, as well as regional and state competitions,” he said. “We’ve done one competition so far, but I have some more planned.”

Jusko loves everything that DECA has to offer beyond just the competitions.

“We will be having workshops for your resumes, guest speakers, and internship opportunities,” he said. “Even if you get a LinkedIn connection out of the call, that’s a win and can never hurt you.”

Jusko claims that students will have a greater say on what goes on in DECA compared to other clubs on campus.

“Since it’s a new club, all members have a say in what we can do. It is not a scheduled or rigid club, and general members can decide what they are interested in,” he said.

Jusko first got involved in DECA when a chapter emerged during his senior year of high school.

“My chapter in high school is very preliminary. I don’t have a solid path to follow or examples, so that’s why it’s open for all members to take the initiative because everyone’s voice is heard,” he said. “Since it didn’t get far, I did my own research on what it could offer LIU, and I felt it was a great club to bring to LIU to go along with the established business program.”

Jusko was happy with the fast development that came with the club’s excitement when he brought it up to faculty.

“After looking, I realized this is something that could become very prevalent at LIU, and that’s when I approached Dan Klein and Chuck Garcia, and they were very excited to bring it to LIU as well, they were behind me all the way,” he said.

“The DECA LIU chapter helps talented business students connect to discuss real-world business in a competitive environment, and it’s been great to work with them as a part of this program,” he said.

Klien knows what it takes to succeed and proposer in this business world, and is certain DECA can put students in a position to do just that.

“We are able to drive into multiple aspects of running a company and brainstorm on ideas to solve pressing business issues,” he said. “The students in the program will enter the workforce well ahead of others who have not participated in DECA.”

Jusko wants to develop his skills while helping everyone else in the club achieve their maximum potential.

“Individually, I want to work on leadership skills, and that’s why it’s very open to the members. It’s not me telling them what we’re doing, and it’s what you feel like you’ll get out of it,” he said. “Even if one person takes away something, it’s a win.”

Jusko wants DECA to have a strong influence on campus.

“I think it should be very prevalent on campus. I want to have a strong presence,” he said. “The more kids we have, the more competitions we can do, and the more fun it will be.”

Jusko would like students on campus to be open-minded and give DECA a try.

“Business is all about networking and what you can learn from other people. If you have any interest, definitely join,” he said. “I want to offer something that’s worthwhile for [club members’] time and help them down the road or sometime in their life.”

Jusko believes with how much DECA can grow, it will be a great learning experience for many students.

“People have to learn to work together in a group with different personalities. It’s always better having people with different views voicing ideas off each other to create a strong business proposition when more minds come together,” he said.

Assistant Dean of the College of Management Chuck Garcia is confident that DECA is the spark business students on campus need to get the experience that co-sponsors the knowledge they are getting through their education.

“In a world of profound uncertainty, DECA stands on a foundation of three critical skill sets: communication, collaboration and creativity. This is exactly what the business world demands from its next generation of leaders,” he said. “The LIU College of Management is perfectly suited to contribute to the mission of this highly inventive organization.”