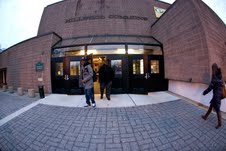 After witnessing the change in light bulbs and the removal of electric doors this semester, students on campus began discussing whether the renovations were caused by the University’s high electric bill. However, William Kirker, director of Facilities Services disproved this rumor.

“I have not heard of the rumor that our electric bill is too high,” said Kirker. Yet, it is true that the University has removed electric doors in Hillwood and the library, swapped existing lights for energy efficient bulbs and shut off heating in major buildings, such as Humanities, during periods when students are not on campus, including Winter Recess.

According to Kirker, LIU Post pays close attention to its energy consumption. “We track our electric and gas consumption at our major meter points on a daily basis. We also track our electric and gas at all locations on a monthly basis,” he added. Not only does the university closely track the electric, but also natural gas. Natural gas is used to heat all of the buildings and to generate hot water.

According to Kirker, consumption has decreased and rates have varied slightly. “We have a few rates that we pay depending on the size of the service, but our average rate right now is about $0.165/KWh. We are using less energy than we did seven years ago,” explained Kirker.

Buildings on campus now use energy efficient lighting. “We are replacing the remaining less efficient lighting in Pell Hall now and will be going back into Hillwood, Humanities, Fine Arts, Music and Sculpture buildings shortly,” said Kirker.

The campus is currently undergoing a major fixture replacement in several of its buildings. The old fluorescent T12 fixtures will be replaced with more efficient fluorescent T8 fixtures.

This project is scheduled to be completed within the next couple of months. “We have been installing these types of fixtures in all buildings on campus whenever we did any kind of renovation. A T8 fixture is our standard. We are now going through and doing the remainder as we are getting a rebate from LIPA for doing so,” said Kirker.

The rebate depends on the type of fixtures. Since the fixtures change from time to time, it is difficult to determine how much the rebate will be. According to Kirker, the University will install other types of lighting such as Light-emitting diode (LED) technology wherever it may be applicable. LED is a device that converts electricity to light by using the movement of electrons.

“Lighting technologies are always changing, what was installed 30 years ago is more efficient than 50 years ago.” According to Kirker, LED is one of the most efficient lights right now, however, the fixtures that house the LEDs may not be applicable for campus settings like classrooms and offices. The LED fixtures can be very costly ranging from $75 to $400. Therefore, there is no financial benefit to installing them. “Each application of lighting is evaluated independently,” said Kirker.

The automatic doors used at Hillwood and the library have been replaced with traditional doors because, according to Kirker, those kinds of doors require constant repair due to breakage. “The costs to repair these doors were becoming unreasonable. These doors were not replaced as an energy saving measure,” he added.

The second reason the doors were changed is that employees stationed by the doors were hit with a blast of cold air for an extended amount of time during the winter months. Automatic doors stay open longer than traditional doors, according to Kirker, so replacing them was necessary to keep the excessive cold out of the buildings.

The former automatic doors enabled easy accessibility, so the replacement raised concerns for those who depend on them to gain access to the buildings. However, Kirker ensured that, “These new door replacements will not affect anyone with a disability. All entrances still have an automatic door that can be activated by a push button.”

Freshman Broadcasting major, Charlie Moerler, who uses a motorized wheelchair feels that his navigation through the campus is seamless. According to Moerler, Facilities is open to suggestions and responds quickly. “In my case, they [the Facilities employees] increased times on doors opening and closing, made WCWP (the campus radio station) handicap accessible and put tables in rooms that needed them,” said Moerler. However, “In the event that there is not an automatic door, [like classrooms] people gladly hold the door open without me even having to ask,” he added.

According to Kirker, variable frequency drives (VFDs) will be installed on pumps and air handlers. VFDs are systems used in air conditioners to adjust motor speed to match output requirements and save energy. Energy management controls on heating and cooling equipment will be installed too. Heating and cooling equipment that is not energy efficient will be replaced with equipment that is more efficient.

Kirker explained that although money is saved instantly when a solar panel is installed, the cost of installation is very expensive. The solar panel installation at LIU Post was about $45,000 after the LIPA rebate. According to Kirker, it will take the campus 14 years to start saving money because of this installation.

In 2008, a geothermal cooling system was installed at the Winnick House and Mullarkey Hall for air conditioning purposes. This system operates through sub-surface conductive heat transfer using the temperature of the earth’s crust as a heat source in the winter and as a heat sink in the summer.

Sophomore Journalism major, Michelle Morey, agreed with the University’s choices of using energy efficient technologies. “More schools should be energy efficient, these changes will affect everyone in the long run,” said Morey. She is currently learning about alternative energy sources and their benefits. “Switching the light bulbs and doors is a start but there is still a lot more that the school can do, solar panels are a start but they can be more sustainable too.” Morey suggests that the University could try to use less plastic in Hillwood and give incentives to students and faculty who do so.

Although LIU Post is not suffering from exceedingly high electric bills, it will continue to move forward with energy-efficient initiatives. “Adding Energy Management Controls has a long way to go. Lighting will keep progressing so we will keep an eye on new options,” said Kirker.

The University will continue to track energy consumption to make sure it does not increase. In addition, LIU Post is working on a new green office program, which will begin the pilot stage soon. It will attempt to reduce the University’s carbon footprint along with energy consumption. Other solar panel systems will also be researched.