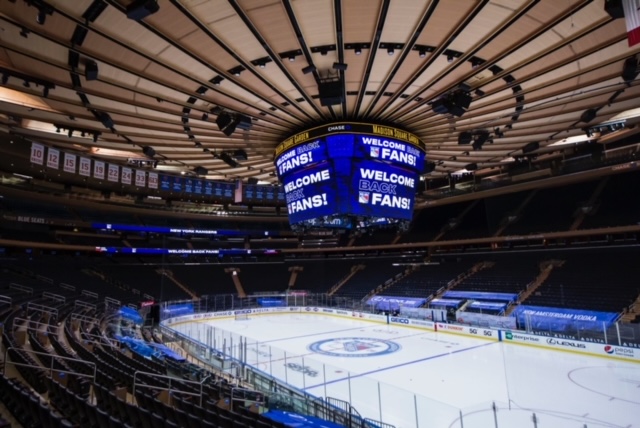 On Feb. 10, New York Governor Andrew Cuomo announced all professional sporting events could bring back fans in attendance. Any stadium or arena approved by the NY Department of Health could have an attendance of up to 10 percent capacity. Every individual must have a negative test within 72 hours of the event and follow all proper mask and social distancing guidelines.

The cross-town rivals Knicks and Nets of the NBA were the first teams to host fans on Tuesday, Feb. 23. This was the first time a live game had fans in attendance since St.John’s basketball played on March.12, 2020, a game that was ultimately canceled at halftime due to the growing coronavirus concerns.

The Knicks hosted the Golden State Warriors at Madison Square Garden. The Nets would play the Sacramento Kings at Barclays Center. MSG is hosting the max 2000 people for their 20,000 seat capacity, while the Barclays Center limits their attendance to just 300 per game. On Feb.26, three days after the Knicks squared up their first game back with fans, the Rangers played their next home game against the Boston Bruins at MSG with the same crowd size of two thousand.

Eddie McQuade is a senior sports management major who has been a Knicks and Rangers his whole life and currently works security at Madison Square Garden. McQuade thinks this is a huge milestone for sports fans and New Yorkers overall.

“To have fans back in the stadium means a lot to us sports fans. It’s definitely a step in the right direction in terms of trying to make life what it was prior to the shutdown,” he said. “It also is vital to the players as they feed off of the energy of the crowd, and they would probably tell you it was just as weird not having fans in the stands.”

McQuade is extremely excited to have the ability to see his favorite teams play in person again.

“Watching games in person are a lot different than being on tv, and if you have never been to a hockey game, I’d recommend seeing a Rangers game, especially at full capacity,” he said.

McQuade believes despite the limited number of fans, you can still sense the massive energy of the fans.

“While two thousand fans max is obviously not a lot, you still feel the atmosphere of MSG. You can feel the Knicks crowd when they’re chatting ‘DEFENSE’ or when the Rangers score a goal, and they’re singing the goal song,” he said. “It may not be as loud as a full house, but you still notice the fans have been waiting for this.”

McQuade claims due to the small crowd size, there are some circumstances that happen that never could at full size.

“In between periods/halftime when fans go get food or whatever they do in between play, you can hear a pin drop bc it gets that quiet, and sometimes you’ll hear the players talking on the court or ice,” he said.

Mcquade says there have been lots of changes and rules fans must follow.

“You can’t use cash anywhere nor even use the ATM. You also have to go to your seat to eat your food, and if you are to buy a beer in the building, it isn’t served in cups anymore,” he said. “A lot of stores have closed too, so many people won’t go shopping at once.”

McQuade says there have been many changes to the structure around seating for everyone.

“All tickets for the games are sold in either groups of two or four, and they must be bought online. No print-out tickets are being accepted at this moment, and there are hand sanitizer stations almost everywhere you turn. The ticket windows are all closed, and we as staff also have to encore social distancing,” he said. “It’s hard on us too because in the cafeteria there used to be tables that seat four per table. Now you have to sit at tables by yourselves.”

McQuade says his job is still the same and has all the same foundations.

“Our jobs are still the same for the most part. Our number one priority is to make sure everyone is safe. Many rows are closed, so that way no fans are within six feet of each, and most seats are at the end of the aisles,” he said. “The biggest change is making sure people wear their masks at all times unless they’re eating or drinking. Obviously, not everyone listens to that rule, but when they don’t, we politely ask them to put their mask back on.”

McQuade claims the biggest change is around the process of items that would otherwise need to be handled differently.

“No book bags are allowed in the building anymore, and we don’t hold onto items anymore. Pre lockdown if you had something that you couldn’t be brought to your seat, we had a place to hold onto it for you. However, that’s now a thing of the past because we don’t know where the item is coming from and whose hands have been on it,” he said. “So, for example, if you bring a pocket knife in the building, you either throw it out or return it to your vehicle. No questions asked.”

The Islanders are the only other NY sports team to have held fans in attendance. Since their first home game under the new guidelines on Feb. 25, they have been hosting roughly 1,400 people per game at Nassau Coliseum.

Once the MLB starts regular-season games, the Yankees will allow up to 5,500 at Yankee Stadium. The Mets will have a capacity of 4,500 at Citi Field.