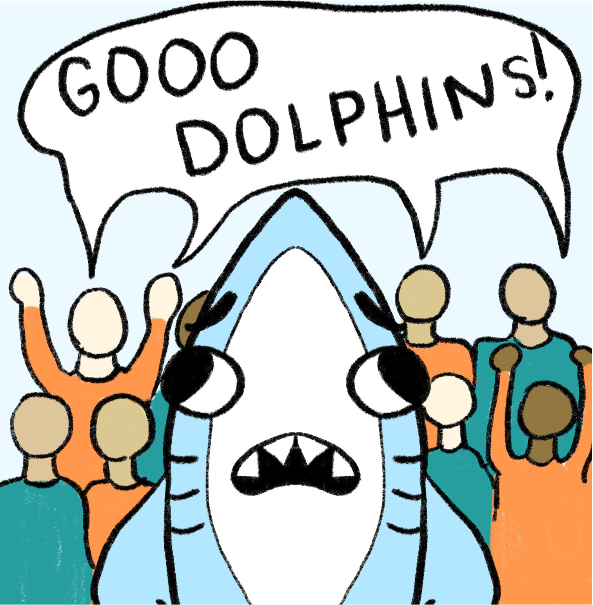 #FinsUp Drowns In a Sea of Miami Dolphins

Brooklyn and Post campuses merged their athletic departments in the fall 2019 semester, bringing with it the new shark mascot and school colors. To bring these programs to-gether, a change in branding was needed, and #FinsUp became the new slogan for OneLIU.

The catchy phrase has caught on fast, particularly during sporting events and across social media platforms. Perry Williams, director of sports management, is optimistic about the new branding set in place. “It’s cool. A new era means a new dimension,” he said.

Williams thinks the new hashtag trend is a great way to bring about the new and improved LIU name. “Bringing the culture, excitement, and passion is good to have because old school is gone. This is a new school, new Division I, new logo, new mascot; it’s personally good to have. Go Sharks,” he said.

Some may be critical of the new slogan and hashtag because #FinsUp gets lost in a giant sea of the Miami Dolphins who also make use of the hashtag. Any social media posts that include this searchable term are very hard to find.

Griffin Ward, a senior broadcasting major, thinks that “if the school really wanted to focus on marketing and brand recognition, they would pick something else.”

Sam Uebel, a junior broadcasting major, has similar thoughts on the popular slogan. She agreed that if the school wanted a successful marketing strategy, they should have better consulted with marketing and graphic design experts “before implementing a new brand design.”

Casey Schermick, director of athletic media relations, explained the origins of #FinsUp and how it came into existence. “A few ideas were proposed by athletic administration and the choices were narrowed down based on the length of the tag, and how well it was perceived to be accepted by our students and fans,” he said. “The approval went through both athletic and university administration.”

Schermick said those involved in the decision making knew about the Dolphins’ use of #FinsUp when they approved it in the spring. “We knew that there would obviously be a mix of content if you search the hashtag, but we felt that the connectivity that our student-athletes would have with it would outweigh this conflict,” he said.

The purpose of a hashtag is to draw attention, to organize and promote a brand. It’s a way for current and prospective students to find, follow and contribute to conversations about the university. This new way of searching for a trend or topic is a free and easy way to get a brand recognized. According to Schermick, “#Finsup” is popular among student athletes and coaches, and he believes it has become a motto for the department.

Another conflict that may have affected the school’s new branding was California State University at Long Beach’s decision to also choose the shark as its mascot. LIU anticipated being the only Division I program with the name; this changed when Long Beach made the announcement last May.

“The timing of Long Beach State’s announcement was definitely unfortunate, though it did not influence the decision on the mascot or the hashtag,” Schermick said.

Overall, students and faculty alike have taken pride in the branding for OneLIU. Use of #FinsUp has grown among social media users attending or working at the school, and the slogan has caught on fast at athletic events.

The marketing aspect could see some improvements, as using the same slogan as the Miami Dolphins could cause LIU to take a hit in their social media presence, but if the slogan benefits outweigh the costs, then #FinsUp and “Go Sharks.”