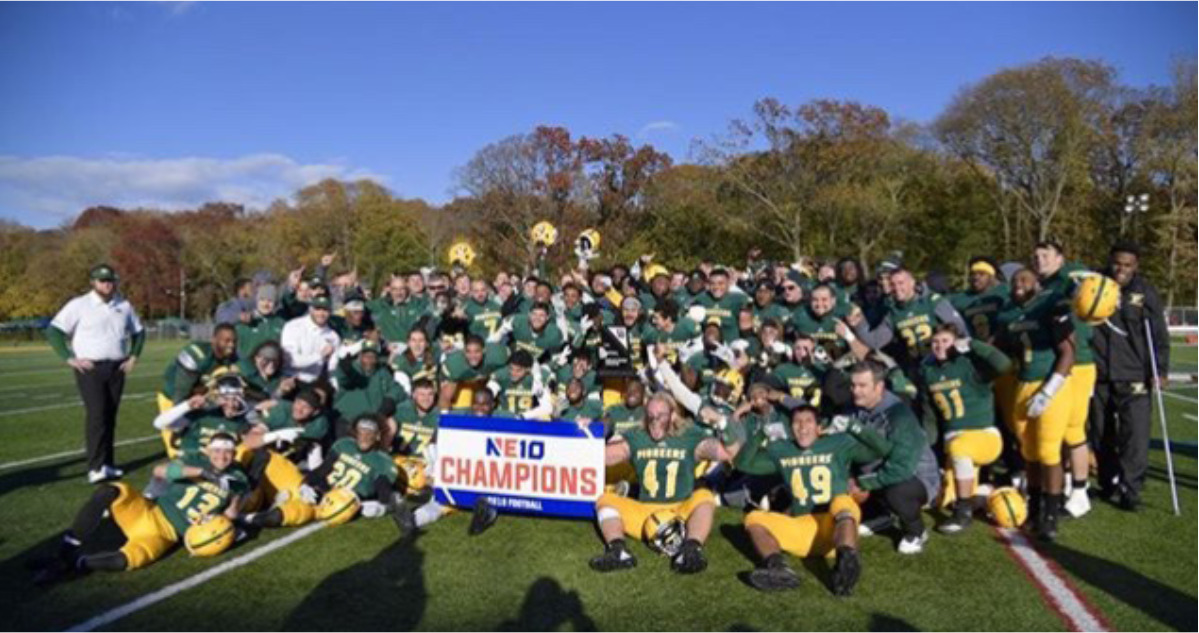 Even though football season ended in December, Pioneer football players have been preparing to get drafted by an NFL football team. Running back Malik Pierre, wide receiver Mike Richardson, wide receiver Deon Mash, linebacker Jake Carlock and defensive end Kevin Petit-Frere have been working hard during the offseason to prepare for the NFL draft. These players earned invites to Columbia University’s Pro Day on March 14, where NFL coaches and scouts evaluated players as they performed different drills to show off their skills in the 40-yard dash, bench press, and much more..

“I had to get two NFL scouts to recommend me to the Columbia University coach, so I could get into their pro day,” Richardson said. He ended the season with 778 yards, 10 touchdowns, and was named to the -10 Conference first team.

“My pro day went really well. A lot of coaches and scouts liked the way I performed and everything,” Petit-Frere said. He ended the season with 11.5 sacks, 53 tackles, and was named to the All-American second team. “Kevin was a monster on the field this season. It always felt like he was making a big play,” said Jason Glickman, a sophomore broadcasting major and the WCWP Sports play-by-play commentator for the football team

The players’ performances earned them invites to workout with the New York Giants. “After performing all the drills and tests, a Giants scout approached me and invited me to their local pro day on April 5,” Carlock said. Carlock ended the season with 67 tackles and 4 sacks. He made two huge plays to help his team win the NE-10 championship and was named NE-10 defensive player of the year.

During their workout with the Giants, each player practiced drills with their position coach.

“We went on the field and did positional work, ran routes with quarterbacks, and then stayed after to catch punts,” Richardson said. He also returned punts for the Pioneers during his three years on the team. Considering Richardson, Mash, and Pierre are offensive players, they went with the offensive coaches from the professional team, while Carlock and Petit-Frere went with the defensive coaches.

“It went well. They had me do different line-backer drills to get a good look at me,” Carlock said. Carlock was also able to work out as a long snapper. “I felt good out there. I felt confident about the drills and my performance.”

“I’d be like a stand-up defensive linebacker, but could also drop back into coverage against tight ends, running backs, and wide receivers.”

Carlock and Petit-Frere both grew up as New York Giants fans and it was a surreal moment to be working out with their favorite team. “I’ve been a Giants fan my whole life. Seeing the facilities and everything was just amazing. It will be something I’ll never forget,” Carlock said.

For Petit-Frere, growing up, his favorite player on the Giants was former All-Pro and former Super Bowl Champion, defensive end Jason Pierre-Paul. “Getting to actually be where he once was and hopefully get a chance to play for them, it’s just ,” Petit-Frere said.

The Post players have also received contact from several other NFL teams. The Indianapolis Colts and the Atlanta Falcons also contacted Petit-Frere. “My agent did speak to the Lions, Colts, 49ers Redskins about me after my pro day,” Richardson said.

“I was able to watch these guys week in and week out. These guys are game changers,” Glickman said. “I would not be surprised if an NFL [team] picks up one of these guys.” The football players will have to wait and hope until the NFL draft from April 27-April 29 to hear if their names are called to be drafted in the NFL.