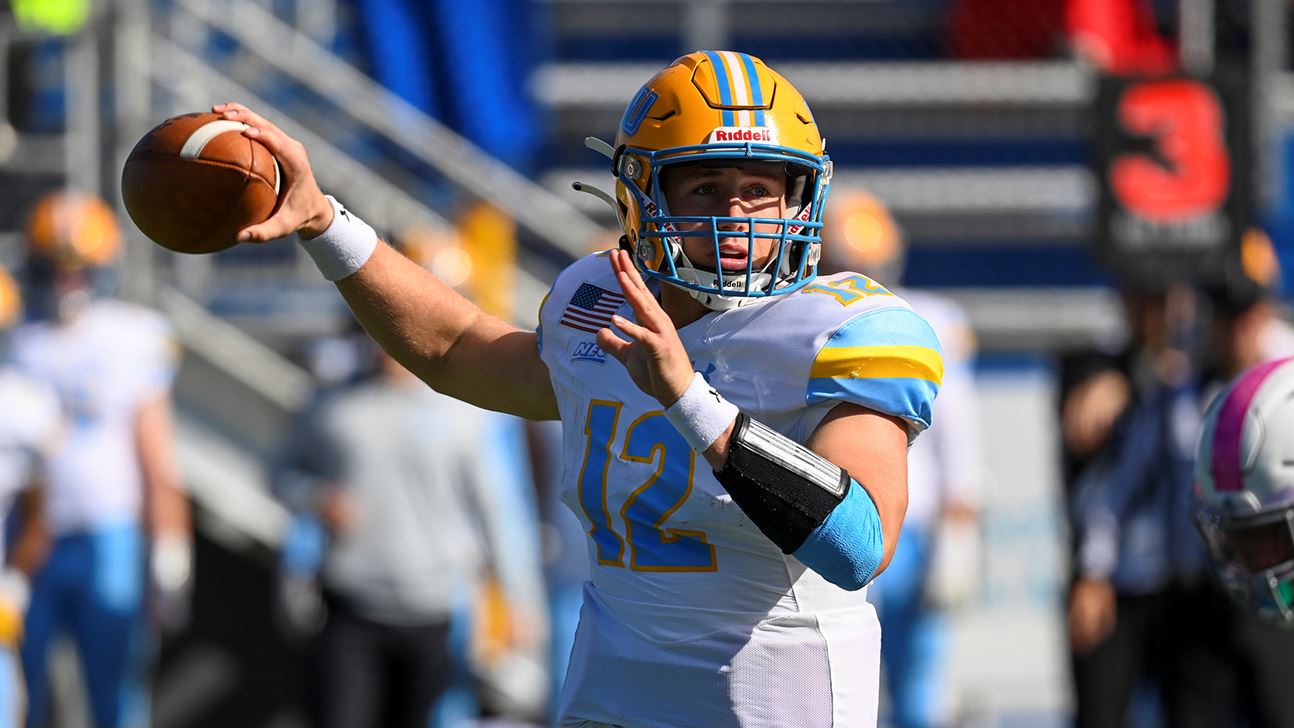 LIU had a tough stretch early on in the season, but finally came through with back-to-back wins against Central Connecticut State University and Wagner College.

This all changed when the Sharks traveled to Central Connecticut to take on the Blue Devils, who won the Northeast Conference in 2019 while going undefeated in conference play. However, after sitting out the shortened spring season due to COVID-19, the Blue Devils have struggled early this year. Coming into the game, the Blue Devils were 1-5, with their only win coming against Wagner College.

The Sharks cruised through the game before winning 30-13, finally eclipsing their first win of the season.

It was a tough back and forth battle early on, with Sharks’ QB Camden Orth throwing an interception on their first drive and the Blue Devils leading 6-3 well into the second quarter.

After the early struggles of both offenses, the Sharks would dominate the rest of the way. LIU scored 20 unanswered points, including touchdown passes from Camden Orth to Owen Glascoe and Derick Eugene. Paul Inzirello would also convert two field goals in between, including one from 47 yards. Inzerillo was named NEC Special Teams Player of the Week for his performance.

The Sharks would put the finishing touches on the Blue Devils with a 23-yard touchdown run from Kevin Wilson, putting the Sharks back up by two possessions with 1:46 remaining in the game.

After all the struggles early on in the season, head coach Jonathan Gill was excited to finally get the team’s first win of the season.

“I was happy for the players and the coaching staff. They’ve been working very hard, so it’s great for them to experience this success and see them celebrate after the game,” he said.

The Sharks’ defense was firing on all cylinders, stopping the Blue Devils 12 out of 14 times on third down. Gill claimed it was only a matter of time before they all excelled together on that side of the ball.

“They’re getting comfortable with slight adjustments and making things a little more simplified while playing fast with focus and confidence,” he said. “That will make you a tough opponent against anyone you play.”

The following week, on Saturday, Oct.30, the Sharks would defeat the Wagner College Seahawks 28-14.

Both teams would swap scores two times each in the first half. LIU would get on the board first on a 19-yard touchdown pass from Camden Orth to Owen Glascoe. Later in the first quarter, the Seahawks would tie the game on a QB sneak into the endzone.

There would not be another score until 3:20 left in the half when Orth would find Kevin Wilson for a 4-yard touchdown. After both teams went 3-and-out, Wagner started their drive at the LIU 44 yard line.

In a matter of 27 seconds, Wagner would attain two rushes for 42 yards followed by another QB sneak into the endzone.

However, the second half was all in the Sharks’ hands as they held Wagner scoreless the entire half, while the Sharks scored on a 6-yard touchdown pass to Derick Eugene and a 3-yard rushing touchdown for Jonathan Debique.

Graduate student and Wide Receiver Derick Eugene has been one of the most reliable players throughout his years in the LIU football program. This year, he has five touchdowns, leading the Sharks.

In an interview with WCWP’s Brendan Kaufman, Eugene claims consistency and preparation allow him to be at his best every game.

“Being injured in 2019 and coming back, I was able to get better due to repetition and competing against guys every day,” he said. “Being out for a long time hurts because you have to get back into shape and get strong again faster and do it against other guys and not just by yourself.”

Eugene, along with all the veterans, believes making sure everyone else has the same vision as you is key to having a strong season and mentoring the underclassman for later on.

“I’m more of a lead by example guy going back to practice and competing and putting my best effort. There are other guys who lead us to our victory this weekend,” he said. “Having those guys around to hold myself accountable makes me better because I don’t want to let those guys down. We expect a lot from each other and want the whole team to celebrate a victory.”

Eugene stated the atmosphere throughout practice has been a key factor in the Sharks’ recent success.

“Coach Gill talked a lot about confidence and toughness, and that was the energy going around that first week. We were much more focused in the morning before we even got to the field,” he said.

Coach Gill had nothing but great things to say about Eugene’s leadership on and off the field.

“I think Derick is a very passionate player. He practices hard, is very consistent and entails the qualities we like all of our players to embody,” he said. “It’s who he is as a person, and he’s very detail-oriented. Majority of the time, the lifestyle you live off the field is indicative of what kind of player you are. He prepares well and has a great sense of pride doing his job at a high level, and that carries over to the field.”

The Sharks held the Seahawks to just 76 passing yards. Coach Gill continues to emphasize the success they’ve been seeing.

“They’ve definitely improved a lot. The defense has gotten better every week and they’re doing their job at a higher level,” he said. “They’re playing more physical, they’re running to the ball, they’re tackling better, and the pass rush has gotten better, which helps out the pass defense.”

The Sharks did ultimately fall to Duquesne University this past Saturday, Nov.6. The Sharks lost 34-28, with it coming down to the last play of the game when the Sharks threw for a Hail Mary attempt which fell incomplete.

Coach Gill believes that he and his team must finish out strong the rest of the way.

“We can continue to do what we’ve been doing the whole season. We just have to stick to the plan and believe in it and fine-tune ourselves every day,” he said.

The Sharks face Bryant University on Saturday, Nov.13 on the road.