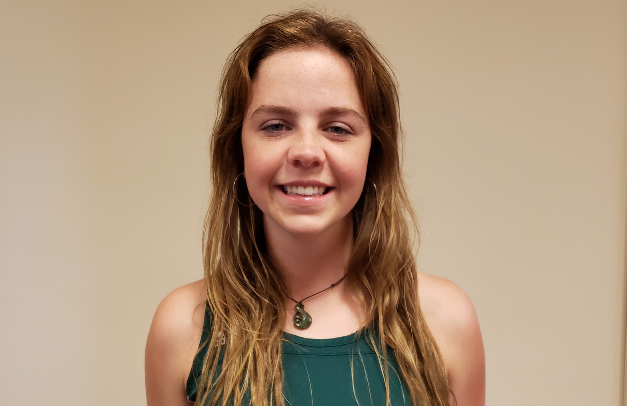 Caitlin Johnstone, senior health major, traded her sea legs to run on land when she joined the women’s rugby team during the spring 2019 semester. She has been a member of the swim team since spring 2016 and plans to continue on the rugby team during fall 2019, the semester she graduates.

Since the swimming season came to an end, Johnstone chose to make the most of her time by revisiting the sport she played in high school. “It’s nice to be a part of a team sport, swimming is more individual,” Johnstone said. She enjoys the learning opportunity that comes along with team sports. Playing on the rugby team allows her to get advice from her teammates and correct mistakes during gameplay. “A mistake might be the ball, not catching it or tackling incorrectly,” Johnstone said

Johnstone finished her swimming season and joined the rugby team with an ankle injury and a fractured foot. “With my injury, I thought I wasn’t even going to get to play,” Johnstone said. She took two months to heal and go through physical therapy before playing on the field in March. Johnstone officially joined the team in January. Despite having to overcome an injury, the main thing Johnstone adjusted to was the amount of running. “I found a lot of my skills from high school were still there, and I didn’t find tackling too bad,” she said.

Since she joined the team late, John-stone was glad the other members were open and welcoming. “Walking onto a team that’s been together already for a couple of years, adding a new person could be messy, but I fit in well,” she said. Having a will to learn the sport again as well as teammates willing to help been vital for Johnstone as she adjusted to playing rugby.

“I knew I wanted to play rugby after I was done with swimming,” Johnstone said. In fall 2018 she spoke with the previous coach, John Royal about joining the team. When Colleen Doherty became coach, she allowed Johnstone to join. “It’s a relatively new team, so the team’s still kind of small and getting on its feet,” Johnstone said. Women’s rugby, which began on campus in 2016-17, has 12 members.

When she played rugby in high school, Johnstone enjoyed playing with 15 players on each side of the field. So far, the Pioneers have played games with seven team members on each side. Johnstone anticipates playing longer games with more players in the fall season

scored her first two collegiate tries for the Pioneers on Saturday, April 13 against Colby Sawyer College. “An achievement for me was being able to overcome my injury and step on the field and play,” she said. Rugby will become a Division I sport under the One-LIU merger.

Published in Rugby and Sports