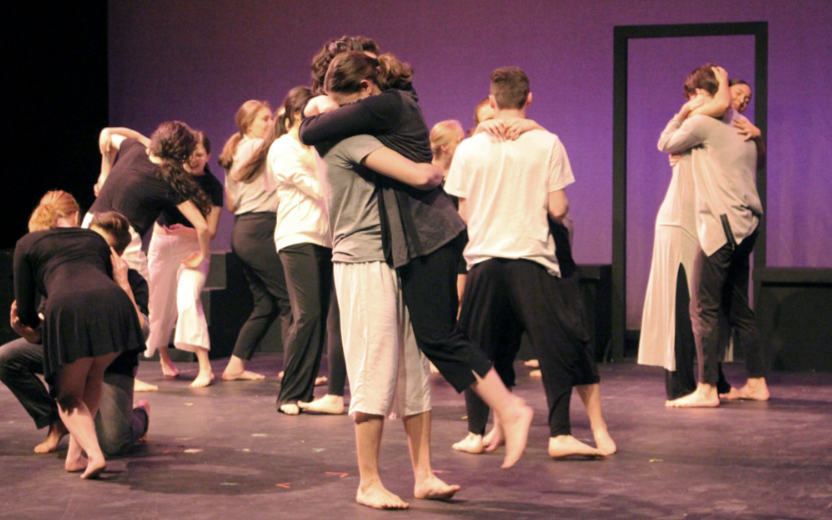 Adjunct theater professors Lauren Reinhard and David Apichell directed the theater department’s Freshman Showcase. After auditions in December, they divided the freshman class of 50 students into two groups for the show. Reinhard is responsible for 26 students while Apichell for 24 students.

Reinhard is an alumna of the theatre department who has been an acting teacher for three years on campus. She has directed over 50 shows, and this is the eighth Freshman Showcase she directed. Aside from the Freshman Showcase, she teaches both Basic Acting and Devised Theatre.

Reinhard has been passionate about theatre since elementary school, when she started participating in school plays. She chose theatre because all of the different professions, or anything she wanted to be in life, can be done on a stage through her art, she said.

Reinhard’s portion of the Freshman Showcase is called “Ovations and Odysseys,” which is a collection of 10 minute single-act plays. Having two showcases as well as having 10-minute portions was “the best way that we can accommodate the class sizes and it is the best way to give everyone a substantive part,” Reinhard said.

Reinhard described the overarching theme for “Ovations and Odysseys” as fear. The theme was chosen based on what the students are going through or feeling, and fear was a common theme Reinhard saw among the freshman class this year.

Reinhard discussed fear and the journey of moving away from their fears with the freshmen. “We discussed how they live their most authentic lives because that is the only way that you really can make real art, out of a place of truth,” Reinhard said,

Apichell attended Penn State for his undergraduate degree, and he attended Post for graduate school. He has taught and directed on campus for the past two years. This is Apichell’s second year directing the Freshmen Showcase, and his third year as part of the directing team.

“I think I got involved with theatre because it is a place you can just be yourself, with no judgment. Theatre is a very accepting and inclusive group,” Apichell said.

Apichell’s show, “Clinging on Closely,” is based on “the end of the world” with a theme that “darkness can lead you to light,” he said. Apichell came up with these themes by discussing with his students what it was like to be freshmen in college, and to be away from home for the first time.

“As I talked to the freshmen, I realized they have this anxiety and fear put upon them with no fault to themselves, but because of things they see in the news and the system in general, they’re carrying this burden; in the theatre all they have is each other,” he said. Apichell said a lot of his 10-minute-plays in the Freshmen Showcase have death in them, but not all of them are sad; some are comedic.

The Freshman Showcase opens April 11 at 7:30 p.m. with Reinhard’s production, and Apichell’s production on April 12 at 7:30 p.m. Each show is about two hours long, with a 15 minute intermission. Tickets can be purchased for free online at www.tix55.com/ptc700, or at the Little Theatre Box office.