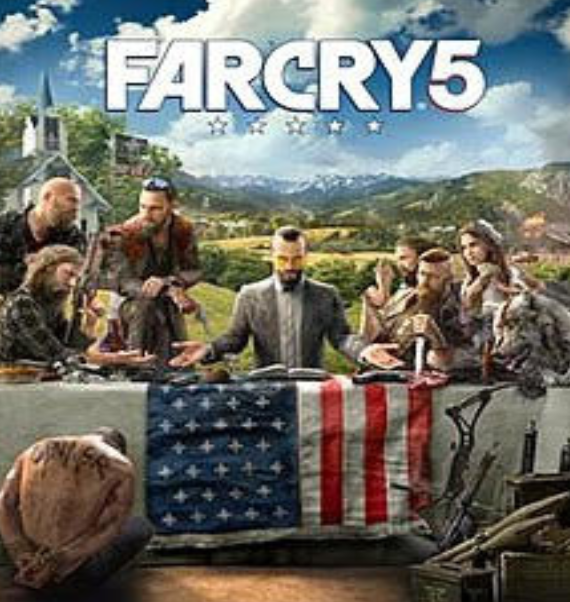 When you think of the state of Montana, you may envision the scenic landscapes of some of its national parks such as Yellowstone National Park and Glacier National Park. However, in “Far Cry 5” a new video game released March 27, things are not so glamorous.

This first-person shooter game takes place in Hope County, a fictional area in Montana. Playing as “Rook,” a sheriff’s deputy, your objective is to stop Joseph Seed, leader of the Project at Eden’s Gate cult. Seed portrays himself throughout the game as a god and speaks to the people of Hope County, preaching that the apocalypse is near and the residents either join him and his brothers and sisters or be marked as a sinner. If you are marked a sinner, you will be tortured and ultimately killed by the Seed family. Seed has three siblings, Jacob, John and Faith. The sister, Faith is the most interesting because of what is revealed about her at the end of the game; it evokes sympathy towards her. Faith’s ability to conjure up hallucinations makes for interesting cutscenes, but it’s also a bit demonic, especially at the end.

The other two,  Jacob and John are less interesting. Jacob carries a hypnotizing music box, and when he plays the music he makes you “cull the herd,” a kind of ritual where you have to kill as many people as possible before time runs out. His missions are exactly the same every time.

John is known as the “baptist.” He believes if you say “yes,” to him, all of your sins can be forgiven. While John seems more reasonable, he’s not. If you object to John, one of the seven deadly sins becomes engraved on your skin. Ironically, John has one of the sins, “sloth,” tattooed on his body.

Ubisoft, the game’s publisher, pushed their limits by referencing pop culture and modern-day politics. In one point in the game, you stumble across a sewer opening and see a red balloon tied to a string, a direct reference to the movie “It.” There’s also a mission in the game that requires you to secure confidential information about President Donald Trump.

The game has a lot to offer besides the main story. There are many side quests that require you to collect vinyl records or destroysilos. The game ends when you finish the final mission, so to continue playing, you must return to a previous save, as if you didn’t finish the game. Like a lot of other Ubisoft games, “Far Cry 5” features online multiplayer where you can complete missions with friends.

The game is awed because it is not particularly challenging, even after increasing the difficulty level. It would be more challenging if there were less fast traveling, a setting that allows players to instantly change locations on the map, even during combat.

Visually, the game looks beautiful. The dense vegetation within the forests and lakes filled with trout in Hope County make you feel like you’re visiting Montana. There are things to do such as fishing and piloting planes.

The latter is fun because of the challenge presented by the cockpit’s limited vision. Despite the impressive aesthetics, the game’s story is bland; in order to face Seed, you must take over the land that his siblings control, which becomes a chore after a while.

Compared to previous “Far Cry installments, this is the first game that takes place in America and has references to pop culture. The best part about “Far Cry” is that each game installment is different.

“Far Cry 5” is available via digital download on Xbox, Playstation and Steam for $59.99.