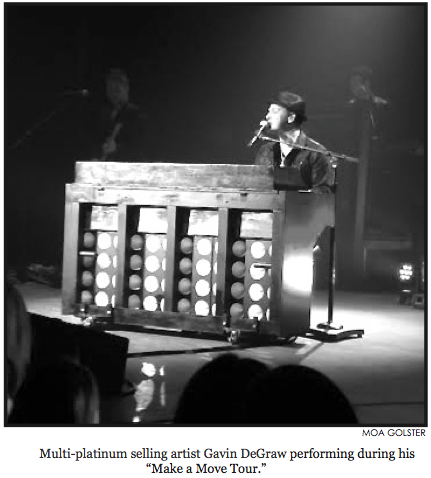 Multi-platinum selling artist Gavin DeGraw took his “Make a Move Tour” to The Space at Westbury, on Thursday, April 3. He fired off a repertoire of new and old hits to the excitement of the audience. People of all ages had found their way to the Westbury venue, which offered both standing and seated tickets – all of them sold-out.

DeGraw entered the stage to the intro of “Make a Move,” which is also the title of his latest album, as well as the ongoing tour. It was clear that we were up for a night of non-stop singing along, as the crowd seemed to know all of the lyrics.

DeGraw continued with his new song “Heartbreak,” and the old hit “Chariot,” and it did not take long before the standing crowd had turned The Space into a dance floor.

The 37-year-old musician grew up in South Fallsburg, New York, and seemed happy to take the tour to his home state. Throughout the show, he interacted with the audience, shared anecdotes about his songs, made jokes, and took pictures of himself with the crowd.

DeGraw has established a devoted fan-base since his breakthrough, which appeared clear as his decade-old songs from the “Chariot” album caused just as much excitement with the audience as his new songs. “Some of you don’t know me, and some of you might know me too well,” said DeGraw, tongue-in-cheek, to the enthusiastic crowd.

It would be an understatement to claim that DeGraw’s last album has been successful since its release in October; before the year-end, it reached number 10 on the U.S. Billboard 200 list, and at least half of the 11 songs have been frequently played on the radio since, including “Best I Ever Had,” “Who’s Gonna Save Us,” and “Different for Girls.”

DeGraw released his first album, “Chariot,” in 2003, which included hits like “Follow Through,” “Chariot,” “Belief,” and “I Don’t

Want To Be.” The latter was also the theme song for the popular television drama series “One Tree Hill,” which he occasionally appeared on. The album went platinum in 2005. Since then, DeGraw has
released four more albums, therein his 2008 self-titled album “Gavin DeGraw,” including the tracks “In Love With a Girl,” and the 2011 album “Sweeter,” with songs like “Not Over You” and “Soldier.”

This year, DeGraw had the honor of opening for Billy Joel at Madison Square Garden, as the artist has established a residency at the venue. To honor Joel, DeGraw shared a nostalgic memory of his teenage- self going to a Joel concert, followed by playing his own version of Joel’s “She’s Always a Woman.”

When DeGraw left the stage after an hour-long parade of old and new hit songs, the crowd chanted him back, and – to its vocal rejoicing – was offered an encore in the form of “Not Over You.”

Janne Eeg, a sophomore International Studies major and a 22-year-old Norwegian Gavin DeGraw fan, jostled to the front of the T-shirt sales table with close to a hundred other fans after the concert. While trying to get ahead in the crowd, she excitingly explained that she has listened to DeGraw’s music for several years now.

“The 14-year-old girl in me was so present tonight,” Eeg said, laughing. “It was so incredibly awesome,” she added, before finally reaching the sales table, and purchasing a Gavin DeGraw tour T-shirt.