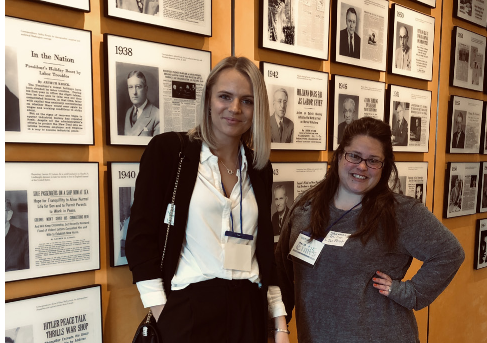 Gen Z: Why the Future of Journalism Is Yours

A feeling of intimidation rushed over me as I looked up at the 52-story New York Times building early Friday morning. Knowing I was about to attend their Student Newspaper Editor’s Workshop was a surreal moment; it’s every aspiring journalist’s dream. I expected to acquire the skills and tools necessary to succeed in the business, but I never anticipated leaving on the whim that the most prestigious in the world is preparing to digress from its institutional language and format in an effort to save itself – from itself, and the ever-evolving media landscape. And who better to help guide them than the demographic they’re trying to reach: Generation Z.

The stress gradually dissipated as I realized we weren’t just there to learn from editors and reporters; this was a discussion about the future of journalism; we were all there as equals; students and mentors alike, together as one unit, to protect and save the fourth estate.

Lindsey Underwood, of The Edit, a newsletter created by The Times for college students and recent grads, helped generate a campaign called “Gen Z: In Their Own Words.”

Gen Z is the most diverse generation yet, and they’re the first to never know a world without the internet or . project tapped into the minds of teens and young adults by asking 995 of them what it is that makes them different from their friends. The newsletter published their answers, along with their photos, their hometown, their age, and the pronoun they identify with. The work is a reflection of feedback from young readers, according to Underwood. The Times is attempting to rescue the next generation from tribal echo-chambers generating “fake news” consisting of “alternative facts.”

The Times has been printing “all the news that’s fit to print” since 1851, and since then, it has remained committed to an authoritative voice and an avoidance of sensationalism to preserve its traditional values and reputation. But the speed of information is picking up quickly, according to Sam Dolnick, who The Times’ report, as well as its work in film, television and other digital products. The news no longer has the time to wait for cold language and long print; it’s been alienated for a more conversational tone and platform. Readers want transparency. They’re in search of that human element from whoever is speaking to them. After all, we’re living in a time where everyone is a micro-blogger with a desire to be heard

During Dolnick’s workshop, he introduced us to what he considers to be modern journalism. “Reading a quote is one thing,” he said, “but to hear and see it is a whole other experience.” He helped launch The Daily – a twenty-minute podcast that delivers the news before 6 a.m., Monday through Friday. The show’s host Michael Barbaro, represents the human factor, asking the questions the readers want the answers to.

Dolnick stresses though, that while the paper is trying to import digital values into its print work, it must also include its tradition of rigorous reporting in its visual and audio formats.

“It’s a thrilling time to be a journalist….it’s liberating,” Dolnick said. “People care about journalism a lot more now than they did five or six years ago.”

But keeping the attention of readers is a conundrum that institutional news outlets face. It requires careful tweaking of conventional journalism. Editors and reporters must steer clear of headlines that may be mistaken for clickbait, while also giving readers and subscribers a reason to come back more often.

Megan Louttit, editor at The Times’ metro desk, believes the answer is a balance between photos and texts that work together to tell a story. She’s currently experimenting with Snapchat’s stories section, in which she incorporates reader’s tweets to reinforce the reported information. If The New York Times wants to reach Gen Z, platforms such as Snapchat are the key

Now, the journalist in me must offer this disclaimer: I’m not a member of Gen Z. I guess I land somewhere between Generation Y and being a millennial. I’m a pro at Facebook and Instagram, but I too struggle at times to understand my classmates and how they think – but as time goes on, I get better at it.

I recall dreaming about one day seeing a story of mine featured in the New York Times. I can remember being stuck on the side of the road without a cellphone; I remember needing a newspaper to find out what time a movie starts at the cineplex I remember waiting in front of the stereo for my favorite song to play so I could record it on a cassette tape.

Traditional journalism has been undermined by the virtual-social world that changes so fast, us older folk can’t keep up. Gen Z is compiled of technologically savvy, young adults with media stamina. I hope they understand the importance of newspapers such as The New York Times, which include verifiable, thorough, “boots on the ground” reporting – because it, the truth will become something we all remember.

Published in Editorial and News