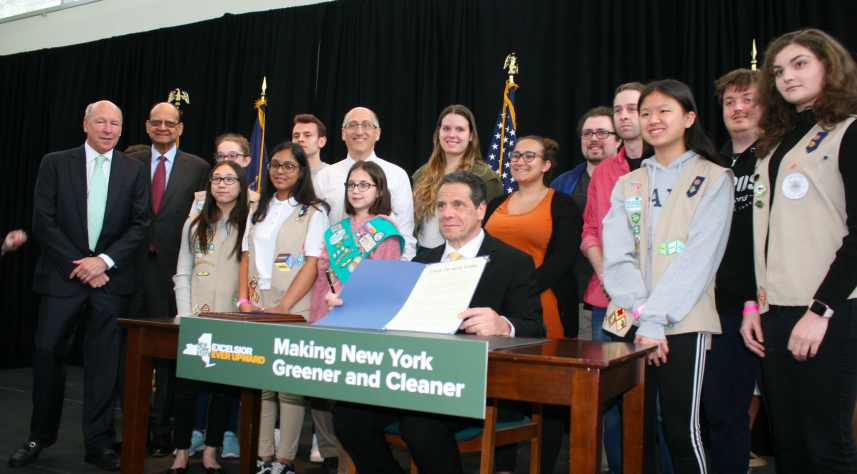 By Josh Tolentino and Jada Butler

New York Governor Andrew Cuomo announced environmental initiatives for a greener New York on Earth Day, April 22, in the Tilles Center Atrium. Approximately 150 people attended the announcement, including Long Island officials, community members, and LIU Post students, staff and faculty; attendees were invited via email and had to rsvp for the event. They gathered in the Tilles Atrium to listen to the Governor, who spoke for approximately 15 minutes.

“It was an incredible honor to welcome Governor Cuomo to our campus on Earth Day for an historic environmental announcement,” University President Kimberly Cline, said.

Cline sat among other university staff and students from the sociology and environmental science degree programs. “As a University that values experiential learning, I was very proud to see our students join Governor Cuomo on stage when he signed the historic ban on plastic bags into law. I was inspired by Governor Cuomo’s vision for a sustainable future, and I’m sure our students were as well,” she said.

Cuomo signed legislation passed by NYS legislators banning the sale of single-use plastic bags in New York, which will take effect in March 2020. New York joins California and Hawaii as the only states where single-use plastic bags are banned. The ban, according to Cuomo, will exempt “garment bags, trash bags, and any bags used to wrap or contain certain foods.” Counties and cities will have discretion to charge a five cent fee for single-use paper bags. The ban states that three cents from the fee will go to the NYS Environmental Protection Fund, which funds capital projects that protect the environment and enhance communities, and the other two cents go towards the locality to pay for distribution of reusable bags.

Cuomo announced several other environmental conservation projects, including the “aggressive” goal for carbon-free electricity production by 2040; the progressive building of artificial (man made) reefs off of the NY Atlantic coast; and the revitalization of 47 NY parks and historical sites through the elimination of plastic bag pollution, with the $110 million allocated by NY legislators in the 2020 enacted budget. “That’s why New York State is not like any other state. New York by our history, by our legacy, we always led on the toughest problems first,” Cuomo said.

Cuomo highlighted that the average American uses approximately 1,500 plastic bags a year, with New Yorkers using 23 billion alone. “Twelve million barrels of oil are used to make the plastic bags we use every year and by 2050 there will be more plastic by weight in the oceans than fish,” Cuomo said. The ban is a step towards reducing pollution and protecting fish and other wildlife.

Alexandra Weismann, a senior political science major who attended the announcement, said she is guilty of using plastic bags. “I always reuse them for my garbage in my dorm or send them home for my mom to use for cat litter,” she said. “It’s definitely something I should be better about.”

Weismann was excited to see Cuomo speak on campus, and believes the ban is a move in the right direction. “I hope we can continue to make policy that shows we care about the environment, especially on Long Island,” she said.

Cuomo stressed New Yorkers must continue to be strong, saying that the federal government “wants to deny, wants to dispute, or out of convenience wants to ignore” climate change by burning more fossil fuels, proposing offshore drilling, and supporting industries that created these problems in the first place. “We’re going the exact opposite way,” he said about New York State’s proposed initiatives. “There’s no more important issue to lead on than the environment.”

The Governor quoted a Native American proverb: “We did not inherit the earth from our parents. We are borrowing it from our children.” With the ban of single-use plastic bag, Cuomo hopes that New York State will lead America in preserving the environment.