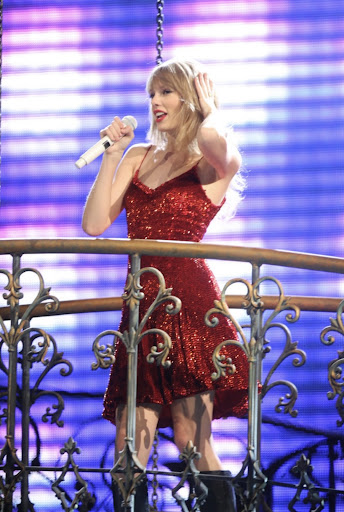 I bet you think about (Taylor Swift)

Taylor Swift has released her second re-recorded album as part of her “Taylor’s Version” project.

“Red (Taylor’s Version)” was released on Friday Nov. 12, and earned the singer her fourth number one in four months, according to Billboard.

Swift is on a mission to re-record all of her old music that is under the ownership of Scooter Braun, an executive that refuses to relinquish rights to earlier tracks. Without the ownership of this music, Swift does not get the primary earnings from streams of the songs and albums.

Once Swift finishes re-recording all of her music, she will be the sole and primary owner of her music.

“Red is about to be mine again, but it has always been ours. Tonight we begin again,” Swift said in an Instagram post the day of the album release.

“Red (Taylor’s Version)” features every original re-recorded track from the first “Red” album, as well as eight never before heard “(From The Vault)” tracks, and a 10 minute version of the song, “All Too Well.”

The “(From The Vault)” songs are ones that Swift wrote during the time of the original album recording, but ultimately felt as though they did not have a place on the album. Nine years later, the songs have made their debut.

The album has made 605,000 sales in its first week, and has been streamed 303 million times. Students on campus account for a number of those streams.

“It was very inspiring to listen to “Red (Taylor’s Version)” after listening to the original for so long. It’s inspiring to see her finally taking back her music and owning it for herself,” senior musical theatre major Sophie Quinoñes said.

Quionoñes is a long time fan of Swift’s, and has been listening to the album nonstop since it’s Friday release.

Quionoñes and other students have grown up with Swift, and she has become a sense of familiarity and comfort.

“Red was one of the first albums I ever owned the actual CD of as a preteen, and it’s so exciting to get to re-experience it now as an adult. It feels like Taylor and I are reminiscing about this period of our lives together,” senior musical theatre major Ellie Lauthner said.

Quionoñes and Lauthner have been listening to Swift’s last re-recorded album, “Fearless (Taylor’s version)” since it was released in April. They are both excited to have a new album to dive into.

“My favorite song on the album is “All Too Well (10 Minute Version) (Taylor’s Version) (From The Vault)” because it really just goes to show how talented of a musician she is,” Quinoñes said.

The song, “All Too Well (10 Minute Version) (Taylor’s Version) (From The Vault)” was accompanied by a short film starring Sadie Sink and Dylan O’Brien. Fans have speculated that Swift wrote the story to mirror events and relationships in her life, though the singer has not confirmed any theories.

“It’s always interesting to hear about celebrity gossip and things like that. I think it’s a little ridiculous that people are making this about her past love life. She’s just trying to own her own music again,” Quinoñes said.

Swift has always had a trail of investigative fans following her attempting to piece together every clue she drops. Her web of clues is extremely difficult to piece together as she has admitted her life is planned two years in advance.

“Swifties are notorious for being master sleuths and digging into every detail of Taylor’s public persona to find out secrets and Easter eggs, and she has encouraged that and said she really enjoys it. Some people take it really far and then it stops being fun,” Lauthner said.

Swifties have been able to predict certain Swift events and announcements, but not always. Some fans are speculating that “Speak Now (Taylor’s Version)” will be announced next, but only one person will ever know what is in store for the fandom next.