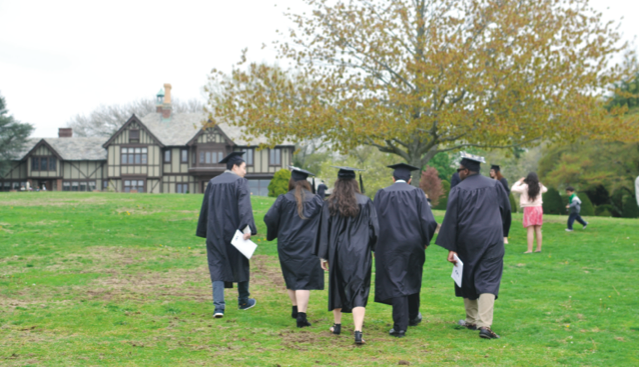 Is Graduating in Four Years a Myth?

According to a 2014 report from the nonprofit group Complete College America, graduating in four years is a myth for most college students. Only 19 percent of full time students at public universities gain their bachelor’s degree in four years.

Most students enter LIU Post anticipating to graduate within this timeframe. In reality, most students do not obtain their degrees within this allotted time. LIU Post is only at a 22 percent four-year graduation rate, according to a 2013 ranking by U.S. News College Rankings and Reviews.

In an effort to increase this rate, LIU Post has instituted a new policy allowing students to enroll in more than 18 credits, at no additional cost, above the flat-rate tuition charge. Beth Wilkow, Dean of Enrollment Services, said that the new policy began during the fall 2014 semester. However, she stated that prior to the new policy, students were already allowed to enroll in more than 19 credits. In the past, students who took more than the 19 credits were required to pay an extra fee above the tuition rate, and had to get permission from the chairperson of their department. With the new policy, students aren’t required to pay a fee; however, they are still required to speak to the chairperson of their department before going forward with any final decisions.

“I think the updated policy is a step in the right direction to hav[e] students graduate on time, but incoming students are usually unaware of the policies they can take advantage of, which is why many of them don’t graduate on time,” said senior Criminal Justice major, Kaity Lopez. “If the administration made all incoming students aware of this policy, the possibility of having students graduate within the promised time would be greater,” Lopez said. Taking more than 18 credits a semester isn’t unusual for Fine Arts students. Cara Gargano, Chairperson of the Department of Theater, Film, Dance & Arts Management, said that her students have been known to take as many as 24 credits a semester.

“I have a friend who took 27 credits last semester!” said Deana Albro, junior Music Education major, who happens to be taking 22 credits herself this semester. She mentioned that because Music Education carries the same workload as someone who is double majoring, the fact that she can take extra credits at no extra charge has become really helpful. “A lot of required music classes are only offered every couple of years, so I’m really glad I can take over 18 credits without having to feel like I need to catch up,” Albro said.

The Complete College America report emphasized the fact that some students take too few credits per semester, fail to register for mandatory classes, or lose credits after a transfer. Although this is an issue many college students face, Jackie Nealon, Vice President for Enrollment and Campus Life, said that LIU expects to have the new policy influence a positive change, affording more flexibility for students in schedule planning.

“We encourage students to think carefully about the amount of credits they take on each semester. When students carry high credit loads, the academic demands and time required to meet them make the work especially challenging, and may not be the best way to achieve your educational goals,” Nealon said. “Students should work closely with faculty and advisors to ensure that the coursework they pursue is right for the individual student.” Nealon added that completing a degree on time is possible. One of the most effective ways to do so is to take college or AP courses while still in high school, and to enroll in the winter and summer intersessions that the university offers.