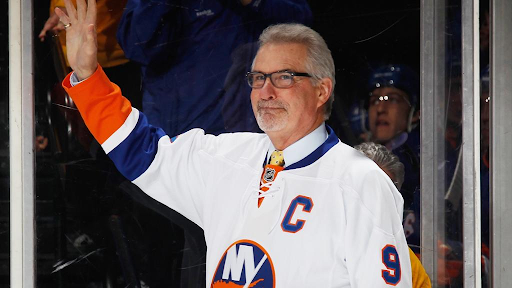 National Hockey League Hall of Fame inductee Clark Gillies, referred to as “the big man” and “Jethro” due to his towering 6’3 frame, was a Long Island legend on and off of the ice.

After notching 319 goals, and 378 assists for 697 points in 958 games and helping the New York Islanders win four straight Stanley Cup championships, Gillies was a staple in the Long Island community.

After being born in Saskatchewan, Canada, Gillies spent his retired life living in Northport, NY. After he sadly passed away on Jan. 21, 2022, at the age of 67, the entire Islanders organization and fanbase were taken back. Often praised for his kind nature and making every fan interaction a genuine one, Gillies left a lasting impression on those around him. He was the classic “Power Forward” in the NHL, using his physicality to lay checks, yet could score goals as well. It was the perfect combination that helped propel the Islanders to all of their success.

Shannon Hogan, the host of Islanders hockey on MSG Networks, painted the picture of what kind of guy Clark Gillies was.

“Clark had an amazing ability to make everyone he met feel special,” she said. “His magnetic personality and smile could light up any room, and I’ll really miss seeing him at games. He loved his family so much and was so proud to show me the latest pictures of his grandkids.”

When thinking about her favorite memory with Gillies, Hogan recalled the last time they had been together before his passing, in November of 2021, highlighting his great sense of humor and all of the fun they had together over the years.

“I’ve done countless interviews with Clark over the last eight years, but he had me rolling with laughter the last time he was on MSG Networks with me,” she said. “I asked him about the new Islanders Hall of Fame wall, and Clark responded, ‘I don’t know about my plaque, it looks like I have wooden teeth.’ Clark had such a great sense of humor. I’ll always remember that show we did together.”

Four-time Stanley Cup Champion Butch Goring recalled his memories of Clark, echoing similar things of his old friend and teammate that many others did, but not many people knew him like Goring did.

“On the ice, I think everybody would be able to tell you pretty much the same thing. During the game, he was a very tough customer, and so when things needed to be taken care of, he did whatever he had to do not only for himself, but for everybody on the team. He was a great protector, and for guys like myself, that was important. He’s a Hall of Famer and deserved to be,” he said. “Off the ice, everybody knows he’s a great community guy, dedicated his life to charities, a funny guy who loved to tell jokes, loved to play jokes and just a really good humored individual. A great family man and just a wonderful person all the way around.”

When speaking of Clark as a friend off the ice, Goring mentioned the character of Gillies that stood out above all.

“You like people who take you for who you are, and Clark knew exactly who I was and what I was all about. When I first joined the team, he took care of me. Even after we finished playing hockey, we still maintained our friendship, and it was just always an honest relationship with one another,” he said. “If I needed him for something, he was there, and if he needed me for something, I was there, so again it just comes back to him being a good person and knowing who he was and knowing that you could have fun with him.”

When thinking about Gillies as a player, Goring chuckled at the fact that his teammates always knew they’d get 100 percent out of him.

“He’s a consistent player, I think his play was dictated by the opposition in some ways. If it was going to be a really tough physical game, he got himself ready to play that type of game. If it was going to be a skating game or the opposition wasn’t going to be overly aggressive, then he would get himself tuned into getting into more of a scoring position or a passing position,” he said. “I think he had that ability to do whatever style of play, as we all did, that was the mainstay for the New York Islanders back in the early 80s. Whatever game you wanted to play, we can all play it, and that would be the same for Clark. Whatever game is going to be played out there, well, he would get himself mentally ready, and then he would show up.”

Shannon Hogan and Butch Goring were joined by the entire Islanders community mourning the loss of the late Clark Gillies before the game vs. the Toronto Maple Leafs on Jan.22, 2022. There were flowers and an emotional tribute video, as well as the hockey world taking a moment to reflect and remember one of Long Island’s best.