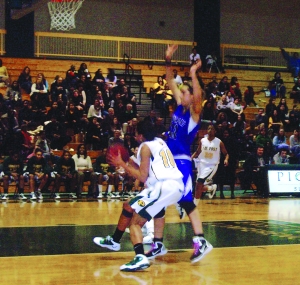 The C.W. Post women’s basketball team powered their way into the ECC Tournament with victories in four of their last five games. In those games, the Pioneers seemed to finally all be on the same page after a relatively up and down regular season.

In the first round of the tournament, on Wednesday, March 2nd, the Pioneers will have to face the Queens College Knights, a team that matches up in favor of Post.  This season, the teams faced each other three times and C.W. Post won each time. In the first game, the Pioneers pounded Queens 82-46. In that game, four Pioneer players had double digit points while Post cut the Knight offense down, allowing them to only shoot 28.6 from the floor.

The next game had the Pioneers traveling to Queens. The game was evenly matched but Pioneer junior Felicia Joyner had a big game, totaling 25 points that proved to be the difference for Post, who walked away with the 76-67 win.

This past week, the Pioneers went for the sweep of Queens.  This time, however, it was Queens that appeared to be in charge for most of the first half, leading 24-22 at halftime, but it was a tale of two halves. In the second half, Post took over for the win. Nicole Marciniak had a double-double and hit a few key shots in the second half, and Janea Aiken added 24 points in the 59-53 victory.

A key for the lady Pioneers will be to stop Queens guard Amanda Bartlett, who has averaged over 20 points per game this year. If Post can keep the momentum that they had at the end of the season rolling, they should have no problem moving on to the ECC semifinals.