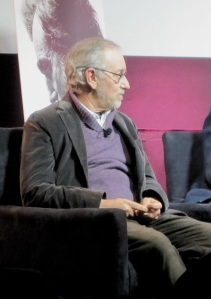 There has been a lot of hype over Steven Spielberg’s “Lincoln.” The film pairs Spielberg with one of the most celebrated actors alive, Daniel Day-Lewis, and brings to light the life and struggle of our 16th president during the turbulent passing of the 13th amendment. “Lincoln” comes at a critical time for Americans, with the presidential election still fresh, and the Academy Awards race picking up steam. The Pioneer attended a live Q&A session and pre-screening with Spielberg and Day-Lewis at the AMC Loews Theater in Lincoln Square, New York City on October 10. Mark Harris of Entertainment Weekly led the discussion, which included questions from the audience and Twitter.

“Lincoln” is based on the book “Team of Rivals” by Doris Kearns Goodwin and takes place heavily within the charged meetings where the passing of the 13th amendment was discussed. “I began to read Doris’ book, which was probably the springboard for all of us, and I essentially ran out of excuses,” said Day-Lewis, who admitted to fleeing from the role at first. “I can’t account for why, at the moment, it appeared inevitable to me, but I think it has in common in all the moments in my life when I have taken on any piece of work. I have to feel there really isn’t a choice. In this case, in that moment, I felt I had no choice but to try and understand this thing.”

Day-Lewis gives an expectedly commanding performance as the President, forging a unique voice for the role. The actor, now in his fifties, will no doubt receive an Oscar nomination for the role, with supporting actor Tommy Lee Jones also up for the ballot. Jones gives a nice edge as Thaddeus Stevens that complements the rest of the cast. Spielberg described how early on in making the film he received an audio tape from Day-Lewis, who read a bit of an actual Lincoln speech. “The voice really never changed,” said Spielberg of the treble-heavy voice. “FDR had a voice in that register. It was probably a little lower than Lincoln’s voice but in that register. You can imagine how that voice can carry.”

“Lincoln” does tend to rely on the basic quirks of Spielbergian filmmaking. His style has become a trademark featuring the ever-nostalgic-and-emotional musical aid of composer John Williams and employing a similarly big cinematic feel that makes the film a drastically different experience. Last year’s “War Horse” had a similar vibe, giving priority to character and dialogue over action packed scenes like in “Saving Private Ryan” or “Indiana Jones.”

One Twitter question addressed the large amount of college students and teachers in attendance, to which Spielberg seemed overjoyed. “Students and teachers are the first wave of the people who I am interested in hearing from about history,” said the director, continuing that “a movie can only be an adjunct, or a supplement to books, to different points of view, to scholars, and historians, and your own teachers.”
The director made it clear that this is not the only interpretation of the life of Abraham Lincoln. “There are so many stories I encourage everybody to learn and read about Lincoln. Let this be a supplement to your learning. Do not let this be your only learning about Abraham Lincoln and that period during the civil war.”

We now live in an age where 200 million dollar movies are common, but with independent writers and directors seeping into the Oscar race, we might be seeing an academy that prefers a more-with-less ethic. Historically, low-budget films have snagged the top prize, like last year’s “The Artist” among top contenders like “The Descendents,” both of which had budgets under 20 million according to Box Office Mojo. Furthermore, since 2007’s “No Country For Old Men,” the academy has chosen films with budgets under 25 million dollars. Spielberg’s own winner was “Schindler’s List” in 1993, which worked on 22 million. “Lincoln” almost triples that number, with a reported budget of over 50 million. Will the more-with-less-ethic have any effect on the race this year?

While a big budget has not made the definitive successful movie (just look at flops like “Battleship”), good acting and writing has. Tony Kushner has produced a hearty script for “Lincoln” full of the chunky monologues and tear jerking moments. “There were so many amazing things I never knew about Lincoln or his office or his rivals,” said Spielberg of the president.

It remains to be seen where “Lincoln” will stand in the coming months. Will it be a historic victory for Spielberg or beaten out by this year’s competition? “Lincoln” hit select theaters November 9 and will play everywhere November 16. To watch the entire Q&A session, visit movies.yahoo.com/lincoln-live. Verdict: 8.5/10