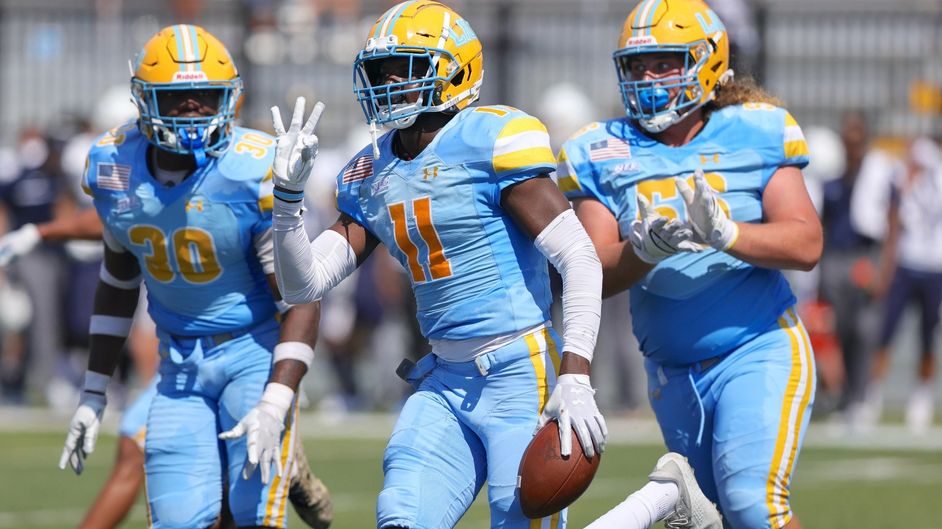 It was a busy offseason for the LIU Sharks Football program, as there were changes made from top to bottom. The first, and most prominent change came in the head coach position, as the Sharks brought in Alabama assistant Ron Cooper to lead the program. Cooper has over decades of experience coaching at the collegiate level, serving as head coach at the University of Louisville, Alabama A&M and Florida International (to learn more about Coach Cooper, check out our website liuthetide.com).

Coming into the season, new head coach Ron Cooper made the expectations for his team clear. In an interview with WCWP’s Ryan Boettcher, Cooper detailed how this season is going to look.

“We’ve got some goals. The goals are really about us, and it’s not about the team we’re playing. We want to play every single week on offense, defense and special teams. We want to play 90 plus percent and play as hard as we can,” he said. “We talked about playing and doing our best, playing hard, fast and aggressive. If we do that, we do it for four quarters, we’ll have a chance to win every single game.”

With those goals in mind, the Sharks’ season kicked off on Thursday, Sept. 1, when they traveled to Ohio to face the Toledo Rockets. Despite coming into the game as massive underdogs, they held their own through the first quarter, holding the high-powered Rocket’s offense to just three points. Unfortunately for the Sharks, the one-score game didn’t last for long, as Toledo’s offense got going in the second quarter, finishing the half with a 20-point lead. That trend continued for the rest of the evening, as the Sharks fell to Toledo 37-0.

The LIU defense had tremendous moments in the loss, stopping the Toledo offense 11 out of 15 times on third down, and was highlighted by Victor Nelson Jr.’s first career interception in the third quarter.

In reference to his standout performance against Toledo, Nelson Jr. attributed it to the improvements he has made throughout his collegiate career.

“I’ve improved tremendously from the very first time I stepped foot on the field. Weight definitely has been my biggest issue. I fluctuate weight very often, and a mentality thing was a very big switch for me. Last year and even the year before, I didn’t get a lot of playing time, and I wasn’t really bought into the program as much,” Nelson Jr. said. “This year, it flipped around on top, a complete 180, and it shows in my gameplay. I want more picks. I got an interception, I want more. I want to lead the NEC in interceptions this year.”

In their home opener this past weekend, the Sharks looked to bounce back against the Villanova Wildcats. LIU’s defense started off hot once again in this matchup, holding the Wildcats to just 3 points in the first quarter. The Sharks’ offense started to get rolling as well, as QB Derek Green connected with WR Zach Rhodes late in the second quarter for the first touchdown of the season, which kept the game close, with the score being 17-7 going into halftime.

It was a tale of two halves once again for the Sharks, as a fumble by WR Michael Love on the first play of the second half led to a quick score by Villanova. The Wildcats never looked back, scoring 21 unanswered as LIU’s second-half struggles continued. Although the Sharks did show improvement on both sides of the ball, they fell short once again against the number 5 ranked program in the FCS, losing 38-21 in the home opener.

One thing that remained consistent throughout the first two games was the outstanding play of safety Victor Nelson Jr., who had a career-high three interceptions along with four tackles in the loss.

The back-to-back outstanding performances by Nelson didn’t go unnoticed, as Coach Cooper had nothing but praise for the redshirt sophomore. In an interview with WCWP’s Ryan Branigan, Cooper discussed what he sees in his young star.

“Vicks’ a very talented guy, and I saw it probably from day two or three in spring practice. Most importantly, he’s a smart kid, smart athlete, understands the scheme, those formations,” he said. “We’ve got several guys that I think can come out and have games like that, and we just got to get it out of them.”

Despite the team’s lack of success in the first two weeks, Nelson Jr. remains confident in the coaching staff.

“Well, [Cooper’s] been around the best. I mean, he is one of the best. You got really seasoned people on this, on this team, on this ball club. I think he can inflame a fire with just his knowledge from an experience from all these other places in Alabama, South Carolina and Arkansas.”

Quarterback Derek Green shared in Nelson Jr.’s optimism about not only the coaches but his fellow teammates as well.

“I think Coach Cooper’s done a really good job making practice tougher than a game should be, throughout fall camp and then these two weeks after fall camp leading up to this game, he’s put a big emphasis on going fast and playing hard and through the whistle and just finishing every rep,” he said.

Green believes the success of this team will come down to mindset.

“I think they’ve done a good job with getting us ready for game-like situations physically, but then mentally just I think it all comes down to believing that we can, because if we go in there thinking we’re gonna get blown out, then I can tell you we’re gonna get blown out,” he said. “I think we’ve all got a pretty good mindset that, you know, we can go in there. We have the athletes, we have the scheme. The coaches have put together a good game plan so that we can go in and compete, and that’s really all we can ask for is to go and compete.”

The Sharks will look to get their first win of the season as they travel to Akron, Ohio to face the Kent State Golden Flashes on Saturday, Sept. 17 at 12 p.m. You can listen live on 88.1 Fm WCWP.org or The Wave.