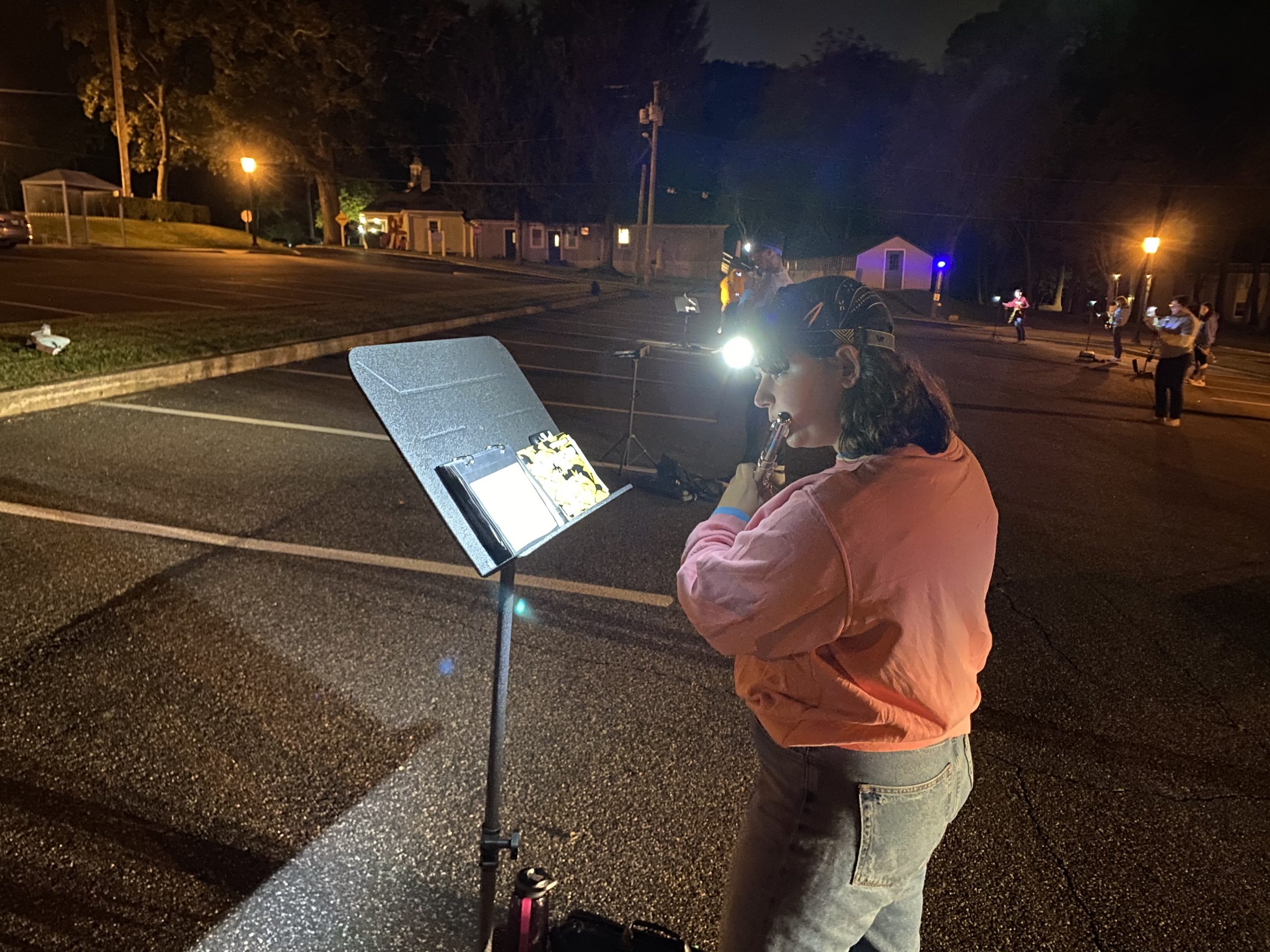 At 7:30 PM on Friday, Oct. 9, over 40 Post students were setting up music stands, assembling instruments, and clipping headlamps over baseball caps in an empty parking lot. The members of the marching band hadn’t been able to make music together for over six months, but on Oct. 9, under the dim lighting of street lamps and car headlights, the night came alive with the sound of the group’s first rehearsal this semester.

“It means a lot to me to be back in a rehearsing group of band members,” Sarah Gordon-Macey, a freshman musical theatre major and flutist with the Marching Band, said. Macey’s sentiments were echoed by the rest of the band, as the group was teeming with the excitement of being able to play together again.

“Marching Band for me means being able to return to another creative outlet in making music and having fun with the people I got to get closer with last year,” Hannah Winston, a sophomore musical theatre major and drum major with the Marching Band, said.

For returning members like Winston, they’ve been looking forward to being back with their bandmates for months now. Like most school activities, Marching Band was shut down in March with the closure of campus. Still, the group has made strong efforts to maintain their sense of ensemble in spite of the pandemic.

“Over quarantine, we would continue communicating in our own group chat and find free days to zoom all together and catch up,” Winston said. “We’ve also been keeping up with posting content on our social media pages.”

Even though classes have resumed, Marching Band has faced unique challenges in navigating how they can safely rehearse during a pandemic.

“It’s been challenging to find the right space and time, and to be able to make music safely,” Winston said. In order to ensure safety, Marching Band rehearsed outside and spaced 12 feet apart from one another, which added another layer of difficulty to the group’s ability to play together.

“As instrumentalists, it’s a lot easier to play when we are closer to our other bandmates, just so that we can hear them,” Macey said. In order to remedy this, the drum majors used a speaker system, and whistles to communicate with the group while they’re spaced far apart. This has allowed the group to successfully play together in spite of social distancing.

With rehearsals successfully underway again, the group has also enjoyed the return of their supportive, fun-loving dynamic. “As soon as I joined the band, I could definitely tell that they are a very close-knit group which I’m looking forward to being a part of,” Macey said. As for returning members, they’re just as excited to be back and making music together.

“I’m happy to be making music again with the family we created last year as well as welcoming new members into the family,” Winston said.