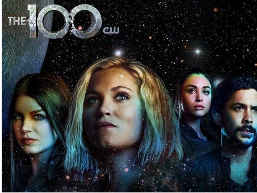 May We Meet Again, The 100 Season Preview

In a trailer released on March 28 for season six of the sci-fi fantasy TV show “The 100,” we find Clarke Griffin [Eliza Taylor] aboard a spaceship called the Ring with her crew, waking up from 125-year-long rest in cryosleep. What was only supposed to be a 10-year-long wait until the Earth they burned down healed itself, turned into a journey through space to find another planet to call home.

The season five finale, “Damocles: Part 2,” left viewers with many questions. Monty Green [Christopher Larkin] and Harper McIntyre [Chelsey Reist], who tasked with staying out of cryosleep to wake the crew in 10 years, have grown old and died in a span of 125 years. In a heartbreaking farewell video message delivered to Bellamy Blake [Bob Morley] and Clarke, Monty and Harper chronicled their years in space, growing old together to their eventual death, and revealed that the Earth they once knew was dead and gone forever.

They left an even bigger surprise behind: an 18-year-old son named Jordan Jasper Green [Shannon Kook] who is a tribute to Monty’s best friend Jasper Jordan [Devon Bostick], who died in season four. Jordan was tasked with waking the crew from cryosleep once they reached a new planet Monty set coordinates for.

Season six picks up the story from there. Bellamy and Clarke must process Monty and Harper’s passing, take Jordan in and decide the next steps for their crew. What awaits them on this new planet? Will they finally find peace and have ending that they’ve so much to achieve

The answer, of course, isn’t as black and white. The trailer takes us into a whole new world known as Sanctum, a large planet with two suns. There is an advanced civilization here, well beyond the years of progression they’ve seen on Earth. Sanctum gives off a “Hunger Games” capitol vibe with its intriguing colors, technologies and people, different than what we’ve seen in previous seasons

Clarke, Bellamy and the rest of the survivors find Sanctum to be a paradise. But it may be too good to be true. Something dark lies within and our survivors are faced with a new enemy they’ve never encountered before: themselves

In an interview at the 2018 New York Comic Con, creator and executive director of “The 100” said this new season will have a different theme from past seasons; not the “whatever it takes to survive” , but to fulfill Monty’s wishes for them of “doing better and being better.”

In the we see Octavia “Blodreina” Blake [Marie Avgeropoulos] in an intense sword fight with herself. This battle seems symbolic of the theme of this next season; two versions of Octavia are in battle: the strong-willed Octavia from the first four seasons when she found herself among the Grounders (people who survived on Earth) versus Blodreina, the ruthless and vicious Octavia that lead her people to cannibalism in order to survive as they were trapped in an underground bunker in season five.

Octavia lost her brother Bellamy’s trust by becoming a “monster.” In the trailer we see the two talking, and Bellamy says, “My sister died a long time ago,” a call back to season three when Octavia disowned Bellamy because she blamed him for her grounder-lover Lincoln’s death. The relationship between the siblings is strained throughout the series. Perhaps we will see the two reconcile their differences in season six

More conflicts are to come to the survivors; Clarke faces new challenges of being a mother to Madi, Madi starts seeing visions of a past commander of the grounders, and Bellamy and Clarke finally talk about the radio calls Clarke left him for six years while they were separated by the nuclear “death wave” Praimfaya at the end of season four

trailer leads to much anticipation about what lies ahead for Clarke and her crew. The beginning of book two in season six of “The 100” premieres on Tuesday, April 30 on The CW.